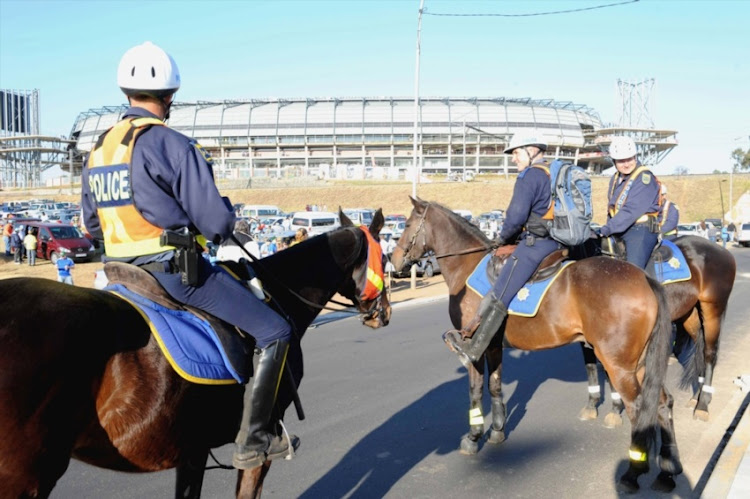 Orlando Stadium, Orlando Pirates MAY 22, police during the Super 14 semi-final match between Vodacom Bulls and Crusaders at Orlando Stadium on May 22, 2010 in Soweto, South Africa.
Image: Lee Warren / Gallo Images

The Premier Soccer League (PSL) has confirmed that security will be tight outside Orlando Stadium when Orlando Pirates host Bidvest Wits in an Absa Premiership clash that is to be played behind closed doors on Wednesday.

Pirates were this week punished by the PSL to play two matches‚ one suspended for a period of 24 months‚ in an empty stadium as a result of violent conduct by their fans during the 6-0 league loss to Mamelodi Sundowns at Loftus last year.

PSL spokesperson Lux September reiterated that there would be no ticketing for the match and only media‚ broadcasters and teams would be allowed inside the stadium.

This match takes bigger security significance following the disgraceful scenes by Kaizer Chiefs fans who caused damages running into millions of Rand and left several people injured at the Moses Mabhida Stadium after the club was knocked out of the Nedbank Cup by Free State Stars.

“It is common knowledge that the match is going to be played behind closed doors but we want to reiterate to the fans that they must not come to the stadium because security will be tight‚" September said.

"There will be deployment of security inside the stadium but more will be outside to ensure that there are no spectators who try to gain access.”

Media will be allowed inside the stadium and SuperSport will televise the match live.

September said journalists would be allowed to report on the match on their digital platforms and through social media.

“We have an obligation to the media and broadcasters and they will definitely have access to the stadium‚" he said.

"As you know‚ even under normal circumstances where spectators are allowed in the stadium‚ anyone can take pictures and post them on social media but live streaming live is only allowed to rights holders.

"That principle remains in place but members of the media will be allowed to report about the match on social media and their other digital platforms.”

Sundowns could be crowned league champions for the eighth time in the PSL era if they get all the three points against Maritzburg United at Harry Gwala Stadium and Pirates lose to Wits on Wednesday night.

In 2005 Chiefs were ordered by the league to play matches against Sundowns and Black Leopards behind closed doors and fined R145 000 fine after their supporters rioted following a 2-1 defeat against Bloemfontein Celtic at FNB Stadium.