Larsen could not believe Chippa wanted to sell Zuke 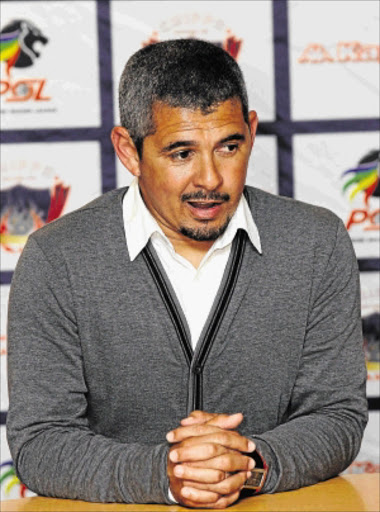 The January transfer window signings of Danny Venter and Sandile Zuke have given Lamontville Golden Arrows coach Clinton Larsen a sudden selection headache as his small squad has been bolstered for the second half of the season.

“It’s a nice headache to have. I think having these players available means they put each other under pressure to perform consistently so that they can start. And‚ like I’ve said‚ that’s a good headache to have and it keeps everyone on their toes.

“We’ll keep making sure we select the best possible XI for every game‚” said Larsen in the ahead of the derby against AmaZulu at the Goodwill Zwelithini Stadium in Umlazi on Saturday night.

Venter‚ 30‚ was signed from Free State Stars and scored for the club last Sunday in their 2-2 draw against Baroka‚ where Zuke was also a starter and influential in the match.

Zuke‚ also 30‚ joined from Chippa United in a move that delighted Larsen.

“I couldn’t believe it when I was told he was available. I snapped him up immediately. I can’t believe Chippa let him go.”

Arrows have won just one of their last 15 games but earlier in the season did hammer AmaZulu 4-1 at home and have a three-point advantage over their neighbours in the standings. Arrows have drawn 11 of 19 league matches this season‚ more than any other top-flight team.

“It is just too many draws but you cannot look too deeply into that. It is just that we are not converting the chances that we are creating‚” Larsen said.

“That happens to a lot of teams. But like I’ve said before‚ when you can’t win a game‚ at least get a point. You don’t want to lose it. Take away our 11 draws and we would be talking as different story. We’d be talking relegation.

“We just have to be patient. Since my technical staff and I took over at this club‚ after promotion‚ we have never been in the bottom three.

“This team has never struggled in a relegation fight and that is something we are proud of. I don’t think that a newly-promoted team has ever done that before.

“The thing I’m most pleased about is the growth in the team‚ the ever-improving style of play that we are trying to implement at the club and I keep saying: ‘Rome wasn’t built in a day’‚” added Larsen.

Golden Arrows coach Clinton Larsen is warning that he expects neighbours AmaZulu to have revenge on their minds when the two sides meet in the Durban ...
Sport
4 years ago

"Coming twice from behind against a stubborn Polokwane [City] outfit showed great character on the part of our players."This is how Golden Arrows ...
Sport
4 years ago

Golden Arrows coach Clinton Larsen has justified the signing of striker Thomas Chideu from Ajax Cape Town, despite the Zimbabwean having only played ...
Sport
4 years ago
Next Article