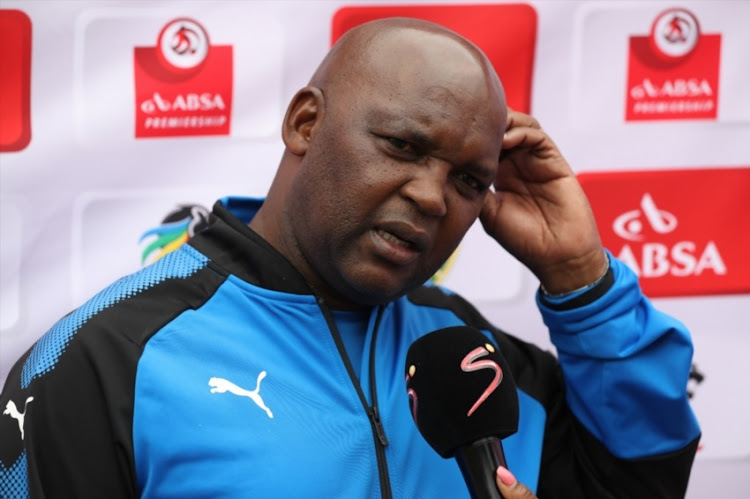 “I’m scared of (Kaizer) Chiefs‚” said Mamelodi Sundowns coach Pitso Mosimane ahead of the eagerly awaited showdown between the two sides at the FNB Stadium on Saturday.

Mosimane is an old hand at the mind games and very few will have believed his utterances.

But the Sundowns coach was not finished and he said the premiership log leaders could not afford to lose to Chiefs for the second time this season.

He said he was even toying with the idea of “parking the bus” at FNB Stadium and adopting a very defensive formation.

“Maybe we do five at the back‚” said Mosimane.

“I’m responding to what the table says. We don’t want to lose at FNB.

“We have to be smart. We don’t want to loose.

"You might not win but we are not losing.

"We have to be conservative‚ probably‚ why not. Maybe it’s always the first time.”

The Sundowns coach said he expected Chiefs to attack them as they will have home advantage.

“We are playing away‚ so somebody (Chiefs) must attack‚" he said.

"We will take it nice and easy in that match. They must also attack us.

“We will be very conservative.

"Give you the ball also. You must also come to us.”

Having managed to get target man Jeremy Brockie from SuperSport‚ Mosimane was asked if he would be tempted to start with the New Zealander on Saturday.

Over his near three-year tenure, Kaizer Chiefs coach Steve Komphela has seen strikers come and go, but in Colombian Leonardo Castro he has finally ...
Sport
3 years ago

“We will see how the game is. Brockie is not a transitional player. It’s a different game there‚" he said.

Mosimane said he would respond to the questions Chiefs pose during match and would study their game against Polokwane City and Baroka FC.

“They (Chiefs) have three centre-backs always and it works for them. Look where they are on the log. Maybe the best defence in the league.

“But I score more. I want goals. It’s good to score three and have a clean sheet. I think that’s a nice balance‚ let’s be honest.

“We’ll have to check their game against Polokwane City and Baroka FC.