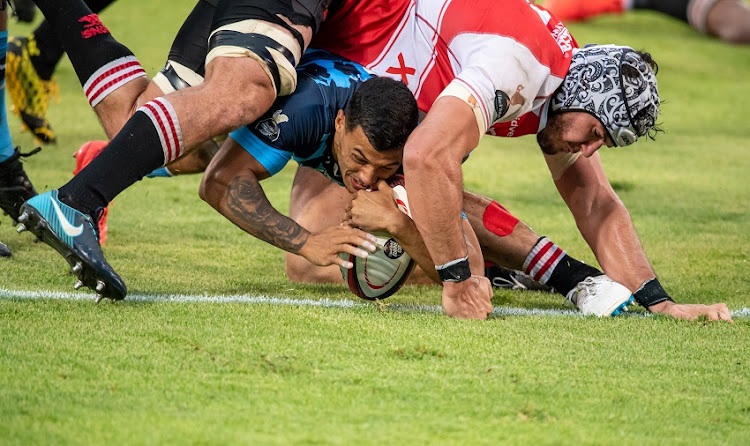 Embrose Papier of the Vodacom Blue Bulls on his way to score a try during the Carling Currie Cup match between Vodacom Bulls and Xerox Lions at Loftus Versfeld Stadium on January 06, 2021 in Pretoria, South Africa.
Image: Anton Geyser/Gallo Images

The Bulls will host Lions at Loftus with the Sharks traveling to Western Province in Cape Town during eagerly anticipated Currie Cup, semi-final stage next weekend.

This comes after the Bulls beat the Lions 22-15 at Loftus on Wednesday and the match between Western Province and the Sharks scheduled for Saturday was cancelled due to Covid-19 protocols.

The remaining matches between the Griquas and the Cheetahs in Kimberley on Saturday and the Pumas and the Bulls in Nelspruit on Sunday will not have any bearing on the semi-final placings.

Lions opened the scoring inside two minutes from the boot of Tiaan Swanepoel and he followed up with two more similar kicks minutes later as the Bulls were punished for ill-discipline.

The home side replied with two penalty kicks of their own in quick succession that were put away by Chris Smith during the early stages of the match were the two teams struggled to find the rhythm.

The Bulls went to half-time with a three points lead after Smith scored two late penalties as the match went to the break having seen seven penalties of what was a kicking contest.

Bulls got the second half to a dream start with scrumhalf Embrose Papier touching down after he received the ball from his captain Duane Vermeulen following a good scrum.

Lions reduced the deficit to seven points when Swanepoel found the middle of the poles with two successive penalties around the hour mark as the visitors launched a late fight back.

It was not to be as the Bulls secured the match when substitute fly-half Morné Steyn put away his penalty three minutes from time as they maintained their place at the top of the standings.