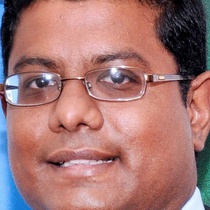 The spike in the need for health-care workers, brought on by the second Covid-19 wave, has propelled DA spokesperson for health in KZN Dr Rishigen Viranna to roll up his sleeves and volunteer to assist overwhelmed public hospitals.

Viranna, who is a medical doctor, made the announcement on Wednesday after a KZN health portfolio committee meeting where MEC Nomagugu Simelane-Zulu revealed that the province has a shortage of 85 doctors and 230 nurses.

“Given these unprecedented circumstances, I have taken up the MEC's call and volunteered to assist the department and am awaiting hospital placement by the KZN health head of department. I am hopeful that this will urgently occur,” he said.

Viranna qualified as a medical doctor at the University of Pretoria but left the field to join politics full-time in 2014.

He told TimesLIVE that as he had taken an oath to serve, he could not stand by when SA needed his skills.

He called on other medical professionals who have left the profession to heed the MEC's call.

“Some are working in other non-clinical industries and have kept their registration with the regulatory authority current. I urge these workers to take up the call and assist during this pandemic, if they can.

“When we qualified, we took an oath to protect and serve patients. Additionally, it is our friends and colleagues from university, internship and community service that are under immense strain. Let us come together to assist them,” said Viranna.

The price of defying Covid-19 regulations

Disclosed someone’s Covid-19 status without their permission? You could be fined R3,000.
News
1 year ago

eThekwini mayor Mxolisi Kaunda has gone into isolation after testing positive for Covid-19.
News
1 year ago

While the province has sufficient public sector hospital beds, with more field hospital and isolation beds to come online soon, according to MEC Nomagugu Simelane-Zulu, Viranna said the major limiting factor in rolling out these beds was the lack of human resources, particularly nurses and doctors.

And as scientists have not yet determined when KZN will reach its peak, as daily case numbers continue to rise, he said the most urgent need was manpower.

“There are numerous reports of exhausted, fearful and emotionally drained health-care workers. Many doctors have described the first wave as a bushfire in comparison to the raging inferno of this second wave,” he said.

Once placed, Viranna said he would continue with his work as DA KZN health spokesperson.

“I consulted with the party and I have their support,” he added.