Stormers bounce back with victory over Griquas in Kimberley 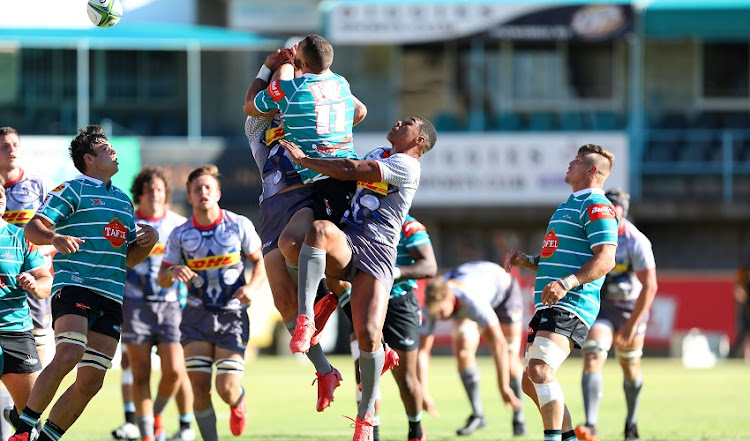 Bjorn Basson of Griquas going up for the ball during the Super Rugby Unlocked match between Tafel Lager Griquas and DHL Stormers at Tafel Lager Park on November 07, 2020 in Kimberley, South Africa.
Image: Carl Fourie/Gallo Images

The Stormers atoned for their embarrassing showing in Tshwane last week when they crushed the Griquas 39-6 in Kimberley.

Having been tossed around like ragdolls by Jake White’s Bulls last week, the Stormers needed to make a statement and the Griquas, who asked more questions of the Bulls when they lost to them than the Stormers did, had no response.

It was a welcome return to form for the Stormers as they were saved by the weather last week as a 50-point hammering was looming for the Cape Town franchise.

In crushing the Griquas, the Stormers recorded their third win of the season and moved into fourth place on the standings with 13 points, four ahead of the Lions, who hosted the Bulls later in the evening.

The Stormers haven’t really had time for entertainment under John Dobson, but that didn’t stop Warrick Gelant from weaving his magic. At each turn, he’d whip out a box of tricks that often had the game Griquas in a defensive fix.

He’s everything South African rugby wants and needs from a multi-skilled fullback. A full international season of his silky skills as Willie le Roux’s replacement was more fitting for a player of his ability. As the secondary playmaker, Gelant caused all sorts of problems for the Griquas and by taking charge; he eased a fair bit of pressure of Damian Willemse.

While Willemse tries to find what works for him, at times he tries too hard and watching Gelant dazzle in the Kimberley heat was at times too hard for him to stomach.

He’ll get better with time, but the Gelant show was worth every dime even though there were no fans to watch him steal the thunder from the storm.

In any case, it was the thunderous Stormers forwards, led by Super Rugby centurion Steven Kitshoff, who stole show with an efficient performance despite the enervating heat.

Both first half tries came from the forwards, with loose-forward Ernst van Rhyn and tight-head prop crashing Neethling Fouche scoring in the eighth and 34th minutes respectively.

Willemse’s goalkicking also let him down as the Stormers deserved more than 15-3 lead at half-time considering their dominance.

The backs joined the party in the second half as tries from left wing Angelo Davids (48th minute) and outside centre Dan du Plessis stretched the Stormers’ lead to 27-6 in the 53rd minute. If the Griquas harboured any hopes of a comeback, they were quashed by Juarno Augustus’s try in the 65th minute.

Willemse scored a simple 72nd minute try that he converted to ease some pressure but it was a better showing from a side that could and should be doing better with the kind of players at Dobson’s disposal.