Wandisile Simelane earns him another start for the Lions 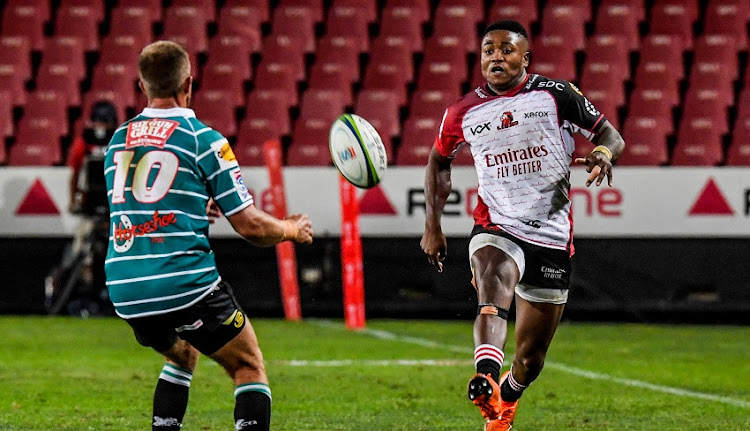 Wandisile Simelane's stellar performance last week against Griquas has earned him another start for the Lions who are hoping to play themselves back into Super Rugby Unlocked (SRU) contention against the Blue Bulls on Saturday.

Simelane‚ who played a leading role in the Lions' 61-31 win over Griquas‚ remains in the No13 jersey but this time will be partnered by Burger Odendaal.

Odendaal‚ who was man of the match against the Stormers at Newlands last month‚ is in the team at the expense of Dan Kriel who moves to the bench.

“Then unfortunately he had to miss a week. Dan was also good last week but we have rotation. Wandi deserves another chance after last week's good performance. We are looking forward to see what they can bring‚” said Van Rooyen.

Odendaal‚ who used to captain the Bulls‚ may prove a useful asset against his former teammates but Van Rooyen played down its significance.

“We have quite a few players with former links to the Bulls. He is one of the more recent ones‚” said the coach.

Another addition to the bench this week is prop Nathan McBeth who will have to front up against more seasoned campaigners.

“Our scrum is getting better every week‚” said Van Rooyen.

“It was also good in the first two weeks. This week we are playing against a senior pack with good‚ quality Springboks. Jacques (van Rooyen) and Trevor (Nyakane) are in good form.

“We are excited about the scrum challenge. Both teams use it as a weapon to get penalties and to attack from.”

The Lions coach agreed his team will have to hit the deck running against a Blue Bulls side that is hard to stop once they get going.

“It is clearly an emphasis for them to start well. I think they have started well in every single game. If you allow them to get momentum with their big ball carriers and their speed out wide they can punish you. Then there is Morne's (Steyn) kicking boot as well.

“It is important for us to start well. It will be a race for momentum.”