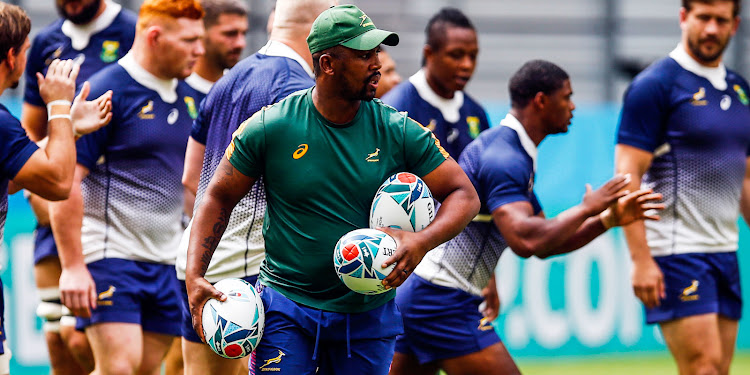 The South African rugby season will be kick-started back into action on September 26 with a double header‚ but this time at Loftus.

Unlike Superhero Sunday in Soweto in January‚ this time the Bulls will take on the Sharks‚ while the Lions will play the Stormers in a rugby festival that will go by the name Vodacom Super Fan Day.

On October 3 the focus shifts to Newlands for the so-called Springbok Showdown that will see teams coached by Springbok assistant coaches Mzwandile Stick and Deon Davids.

The much anticipated news comes after a long wait due to restrictions brought about by the Covid-19 pandemic.

Rugby in South Africa will return three-and-a-half months after New Zealand kick-started their season with Super Rugby Aotearoa‚ while the Australians followed a few weeks later.

The match-up at Newlands will generate considerable interest.

For that clash the teams will line up in Green and Gold with Rassie Erasmus (director of rugby) and Jacques Nienaber (Springbok coach) acting as the two team commissioners.

In a statement SA Rugby said the selection process will take the form of a draft pick from an enlarged squad of 60 players with Green and Gold team bosses taking alternate turns in an old-style ‘schoolyard pick’ to assemble their match-day squads of 25 players each.

“This will not only be an opportunity to see the best of the best available in South Africa square off against each other in what promises to be something never seen before‚ but it will also provide the players with another valuable opportunity to shake of the rust and get the legs and lungs going after not playing any rugby in the last six months‚” said Erasmus.

“The players will be encouraged to showcase their skills – individually and in their teams – and while it will be full-on‚ we’re expecting to see a highly competitive match of quality players against each other.

“It will be exciting – from the moment we select the squads‚ with a number of twists thrown in for good measure – through the build-up to the match and the actual encounter in Cape Town.”

Details of the local competition‚ with each of the teams facing the others home and away and every side enjoying two byes during the competition‚ will be released in due course.

To make up for time lost over the year the local competition will continue over Christmas and New Year and will culminate in semifinals (January 16) and a final on January 23 next year. This will be a first for SA Rugby.

“This is a very exciting plan for the next few months‚ considering all the challenges we’ve faced this year due to the Covid-19 pandemic and it will be great to see our best local rugby heroes battle it out from October to January‚” said Jurie Roux‚ chief executive of SA Rugby.

He added that spectators won’t be allowed inside the stadiums as they are still working with certain Covid-19 regulations.

Roux said that plans for the Springboks to play the Rugby Championship in Australia were still being pursued but were dependent on international travel and other governmental restrictions as well as player wellness and high performance considerations.