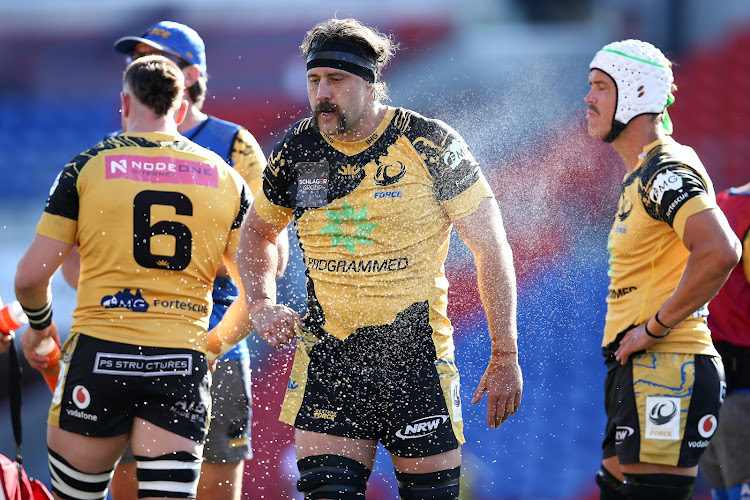 Jeremy Thrush of the Force cools down during the match.
Image: Jason McCawley/Getty Images

The Melbourne Rebels' last-gasp victory over the Western Force to secure a playoffs place for the first time not only brought backroom staff to tears, it also went a long way to securing their future in Super Rugby.

The Rebels beat the Force 34-30 to sneak into Super Rugby AU's elimination final next week against the Reds, with the winner to then face the Brumbies in the final of the domestic competition on September 19.

The possibility of winning the title seemed a distant one only a couple of months ago for the Rebels, who have been notoriously inconsistent since coming into the competition in 2011 and generate little profile in a city where Australian Rules football is king.

Their sub-par performances and lacklustre crowds prompted critics to call for them to be axed with Super Rugby set to go through a major shake-up next year.

"It's a big moment for our club," Rebels coach Dave Wessels said.

"There was a staff member who has been here since the start in tears after the game so it means a lot to people."

With the Rebels looking more secure, the spotlight shifts back to the Force, who were dumped from Super Rugby in 2017 and only kept alive after being bankrolled by mining magnate Andrew Forrest.

Rugby Australia (RA) Chairman Hamish McLennan has said he wants the Force brought back into the fold and has stuck to demands that any future Super Rugby competition format involves at least five Australian teams.

RA are currently without a television deal from 2021 and sent out expressions of interest to broadcasters last month, with the Force included in their plans. That deadline, however, came and went on Friday.

While the Force were competitive in Super Rugby AU they could not finish teams off and lost all eight of their matches.

"Week in, week out, we haven't got the results we wanted," captain Ian Prior said.

"But we're proud of the patches of performances that we've strung together. There has been a lot of hard work over the last couple of years to get to this point."