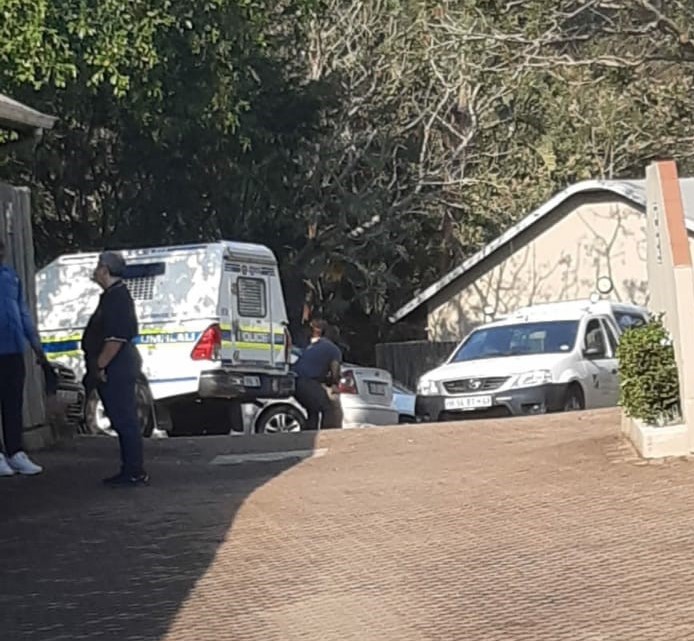 Investigators at the Simbithi Eco Estate, north of Durban, on Wednesday where R155m worth of drugs and chemicals were uncovered.
Image: Supplied

Members of the Hawks and police made a major breakthrough in the fight against narcotics after they uncovered R155m worth of schedule 6 drugs and chemicals at a luxurious golf estate in Umhlali on Tuesday.

The bust took place at a unit in the upmarket Simbithi Eco Estate in Shaka's Rock on the KwaZulu-Natal Dolphin Coast.

Hawks spokesperson Simphiwe Mhlongo told TimesLIVE that investigations spilt over into Wednesday with crime scene investigators working through the night in an attempt to establish leads that could lead to an arrest.

“On Tuesday Hawks members from Durban serious organised crime unit, working with Umhlali police station members, conducted an intelligence-driven operation. Members swooped on one of the premises and a search was conducted,” he said. “In the garage members found bags of suspected anthranilic [acid].”

Anthranilic acid is a common chemical used for manufacturing Mandrax — of which thousands of tablets were also discovered at the home.

“They proceeded inside the flat and bags of Mandrax powder as well as Mandrax tablets were found. In the bedroom members found heroin powder, heroin capsules and more Mandrax tables.”

#sapsHQ Durban #Hawks seize about R154 MIL worth of drugs at Simithi Eco Estate on Tuesday, 15/09. The estaimated value of the drugs is expected to increase, investigation continues. Developments will be communicated soon. Media Enquiries: Capt Simphiwe Mhlongo 071 481 3475. ME pic.twitter.com/45mvHlXB9t

“The street value of the seized drugs is about R154,929,000. The operation is in progress and no arrest have been made at this stage.”

A source close to the investigation said arrests were imminent as investigators were working closely with the estate management.

This is the second major bust for the province in less than a week after the Hawks along with members of the Richards Bay serious organised crime unit, in collaboration with the Mpumalanga crime intelligence, intercepted a truck which had been ferrying close to R90m worth of heroin powder from Mozambique into northern KwaZulu-Natal.

The truck had been custom-built to conceal the drugs.

Cape Town police have spoilt the weekend for drug dealers.
News
1 year ago

Three people have been arrested after being caught ferrying close to R90m worth of heroin powder from Mozambique into northern KwaZulu-Natal in a ...
News
1 year ago
Next Article