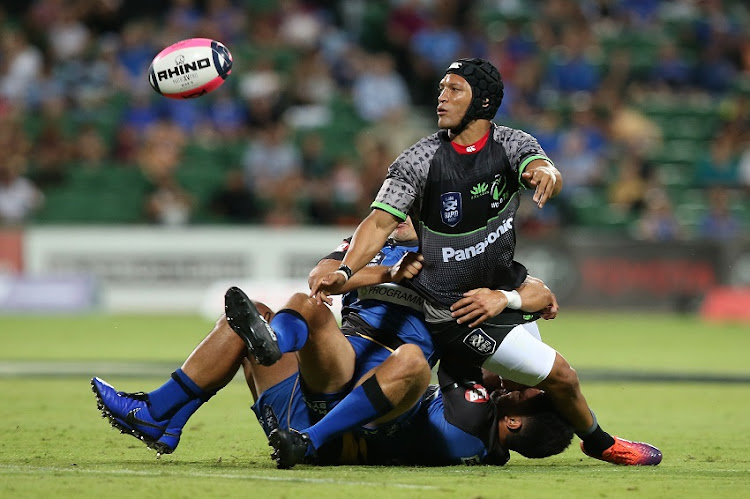 Gio Aplon of the World XV offloads the ball during the Global Rapid Rugby match between the Western Force and the World XV at HBF Park on March 22, 2019 in Perth, Australia.
Image: Paul Kane/Getty Images

The Bulls’ buying spree is showing no signs of abating with former Springbok and Stormers wing Gio Aplon being their latest recruit.

At 37‚ Aplon is long past Test reckoning‚ especially with the fact that the Springboks are well stocked from a back three perspective‚ but Bulls director of rugby Jake White looks pretty keen on getting the players he wants for when rugby eventually resumes.

Aplon‚ who played the bulk of his South African domestic rugby for the Stormers and Western Province‚ left South Africa in 2014 to join Grenoble in France. At the time of his leaving‚ he’d represented the Springboks 17 times and scored five tries.

The last of his Tests came against England in Port Elizabeth in 2012 from where then Springbok coach Heyneke Meyer didn’t seem to be too much of a fan despite his consistent performances with the Stormers.

Aplon spent three years at Grenoble before joining Toyota Verblitz in Japan. White‚ who wasn’t always known for his fondness of small players in his various coaching stints‚ worked with Aplon in Japan.

There must be something Aplon has done right in Japan for him to follow White back to Pretoria‚ where he’ll be facing competition from Warrick Gelant‚ Cornal Hendricks and Rosko Specman.

They are fleet-footed and very good‚ but Super Rugby is also about depth‚ something the Bulls lacked in some positions. Aplon was clearly chuffed to be returning to South Africa where it’s clear that he’ll be closing off his glittering career.

“The Bulls have always been a formidable force in the rugby world. I have always had a great deal of respect for the brand and what it has achieved and I am truly looking forward to running out at Loftus Versfeld. Jake has an amazing vision and plan for the team‚ and I am just honoured that he wants me as part of it‚” Aplon said.