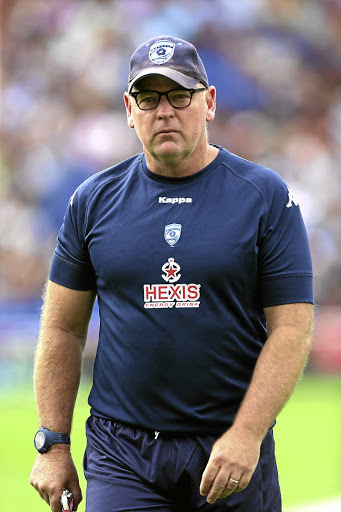 He may have stood on top of the rugby world but Jake White’s methods haven’t been universally popular.

Some players have remonstrated against the Rugby World Cup-winning coach’s ‘harden-up’ approach‚ while his battle plans have left some fans cold for what they perceive a lack of guile and nuance.

White‚ back in the country to take charge of the Bulls following stints in France‚ Australia and Japan‚ has a simple retort – look at the results.

The coach is mildly piqued by the suggestion teams under his aegis are risk averse and have an over-reliance on their forwards.

“I find it interesting that people would hold that view. The fact of the matter is in 2007 we had the best player in the world and he was a wing‚” White reminded of Bryan Habana’s dash to becoming world player of the year.

White is a self-confessed traditionalist who holds on to the game’s time honoured values and customs. His view of the game is seen through the prism of what has made South African rugby so enduringly competitive.

It is also a template that has helped establish the Bulls among South African rugby’s blue bloods but White feels his methods can be imposed anywhere. “There are certain fundamental things in rugby that have to be adhered to. Doc [Danie] Craven spoke about the importance of your forward pack and he was a scrumhalf.

“Look at the way the Springboks played in the last World Cup. They used their forwards and there was very little their opposition could do about it. You have to apply the game’s principles properly if you want to be successful‚” White stressed.

His methods certainly turned around the fortunes of the Brumbies when he in 2013 coached them to their first final since 2004. They were more bucking broncos than show ponies when he was done with them. Seven years after his departure the Brumbies’ pack still stampede in tight formation.

“The Brumbies have taken it on board. They have continued mauling and they are one of the most effective teams at doing so. That wasn’t always their strength but some teams now try and emulate them‚” he pointed out.

White‚ who eagerly shares his deep convictions‚ believes he is older and wiser since the night of his most glittering triumph in Paris 13 years ago.

“I would like to think that I have grown as a coach. Coaching a Japanese player with a degree is different to coaching one in France‚ here or Australia.

“Also coaching in Japan and France over the last few years broadens your perspective. If you don’t speak the language‚ or initially you don’t‚ you have to do everything through a translator.

“You have to be absolutely spot on in what you want to communicate. If you say ‘now go’ it might mean something different to a Japanese player.”

At the Bulls however‚ you sense White and his ways will hardly be lost in translation.