Lock issue just one of many problems for Stormers 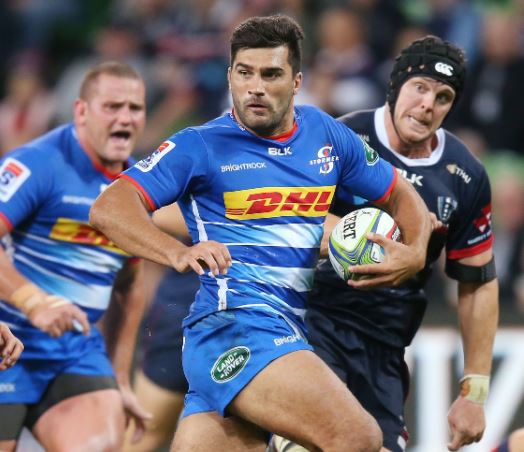 The DHL Stormers storming centre Damian de Allende on his way to scoring a try during their long awaited overseas Super Rugby win as they overcame the Rebels in Melbourne on Friday April 12 2019.
Image: The Stormers/Twitter

As the Stormers limp towards another season of mediocrity after a bumbling 19-17 home loss against the Brumbies at Newlands on Saturday‚ they also face a looming lock crisis.

During the match against the Australian stragglers‚ the Stormers lost both Cobus Wiese and Salmaan Moerat to suspected concussions.

Considering they are already without Eben Etzebeth (calf)‚ Chris van Zyl (back) and JD Schickerling (shoulder)‚ they face a potential problem for next week’s battle against the Bulls at Newlands.

Pieter-Steph du Toit and Ernst van Rhyn‚ who both started at looseforward but finished the match in the second row‚ might have to start against the Bulls next week.

“We are pretty thin at lock at the moment. It affects everything because it alters the way you want to play tactically‚” coach Robbie Fleck said.

“The Brumbies scored a try while Salmaan was knocked out. It was a head injury and the game should have been stopped there.”

But the biggest issue the Stormers face is how to convert their mountainous possession into points.

Some lenient refereeing by Kiwi Nick Briant at the weekend didn’t help them‚ which allowed the Brumbies plenty of scope to disrupt the Stormers.

They gave away four penalties in succession in the red zone without sanction and repeatedly sacked Stormers’ mauls without punishment.

But the Stormers were woeful as well.

They enjoyed almost 70% possession and territory but couldn’t break down a belligerent defence. It was a result that has tilted the Stormers’ season into the negative with five losses in nine games now.

"We said afterwards that we felt like we had taken one step forward (after beating the Rebels 41-24 in Melbourne last week) and now two steps back‚” Fleck said.

“Having said that‚ we did well to get back into the game‚ those 12 points we gave them through two tries near the start were soft. We were completely dominant for the remainder of the match.

"They didn’t really play much or try and engage with us. They just slowed the game down. The referee allowed them to do that‚ but you do have to give credit to their defence."

The Stormers also spurned several opportunities to accumulate points through the boot after earning so many penalties close to the line.

They could have built scoreboard pressure that would have forced the Brumbies to play more rugby‚ which could have changed the shape of the match.

But Fleck backed the decision of captain Steven Kitshoff to either take scrums or kick to touch with the penalties they earned.

"I have to back the captain on that‚ the players felt we had them‚ and you have to remember that at the time we were turning penalties down we were behind in the game‚" said Fleck.

"So I do understand the decisions in that regard. Maybe in hindsight it should have been different. But I backed it at the time. We attempted a penalty towards the end through Josh Stander in an attempt to get the lead and he missed.

“Then a few minutes later we had another penalty in a more difficult position near the touchline.

"We set up an attacking lineout and that maul was sacked two or three metres from the line and we didn’t get the penalty. It was small margins.

“There were plenty of penalties that they conceded‚ and I felt the referee should have yellow carded them earlier in the game to sort that out. They were deliberately slowing the game down by giving away breakdown penalties."