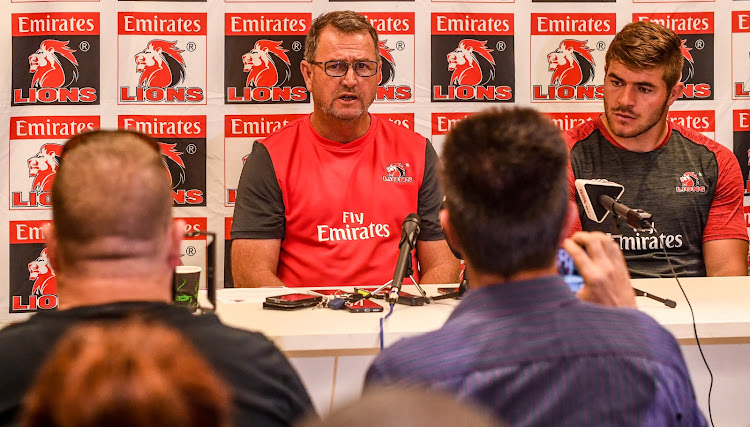 Swys de Bruin (coach) of the Lions and Malcolm Marx of the Lions during the Emirates Lions Team Announcement and Mix Zone at Emirates Airline Park on March 07, 2019 in Johannesburg, South Africa.
Image: Sydney Sehibedi/Gallo Images

Having steered the Lions to a third successive Super Rugby final last year (the first two as assistant coach under Johan Ackermann)‚ De Bruin says he isn’t drawn to the bling.

“To improve what we are doing and play a better brand‚” he said when asked what his outstanding objectives might be.

“To make a difference in their lives we can then maybe have a bonus and get the right cups. But it is not about the cup. It is about reaching maximum potential in this team. We are not there yet. We are striving to get there. It looks very promising I must say‚” said the coach.

De Bruin who took over from Ackermann at the end of the 2017 Super Rugby campaign‚ solidified his position by guiding the team to a third successive final.

After a wobbly start this season the Lions currently top the South African conference and De Bruin wants to continue the trajectory.

He derives huge satisfaction from players fulfilling their potential.

“I love it when one our youngsters come through and make it. There is nothing so fulfilling. The day I heard Malcolm (Marx) came through KES (King Edward VII High School) and our system to become a Springbok‚ wow.

“That is very fulfilling. I’m an educator‚ a teacher all my life. That makes everything worth it when you battle and lose but the player still comes through. The team may not have had many stars but then suddenly things start clicking like a puzzle and they go. It is a feeling I can’t describe‚” he added.

The coach explained he arrived at the decision to stay‚ not because he had limited opportunities elsewhere.

“There have been opportunities. It is a big world out there. After some big considerations with my family we came to the conclusion that it is the right thing to stay. We haven’t finished what we started. That was the thing. It was never about other stuff. We want to do what we love and carry on with it.”

De Bruin‚ who will still be seconded to the Springboks after Super Rugby runs its course‚ is enthused by his environment and what he is working with.

“We have a young team and we have the right experience. It looks very good. We have seven u21s in this squad. Imagine what they are going to be like in two years’ time. That is all the stuff that stuck with me. We have a fantastic leader and a group of players. I don’t know where else you’ll find the quality leaders we have in this team. It is a great honour to continue what we started. I look forward to coming to work in the morning.”