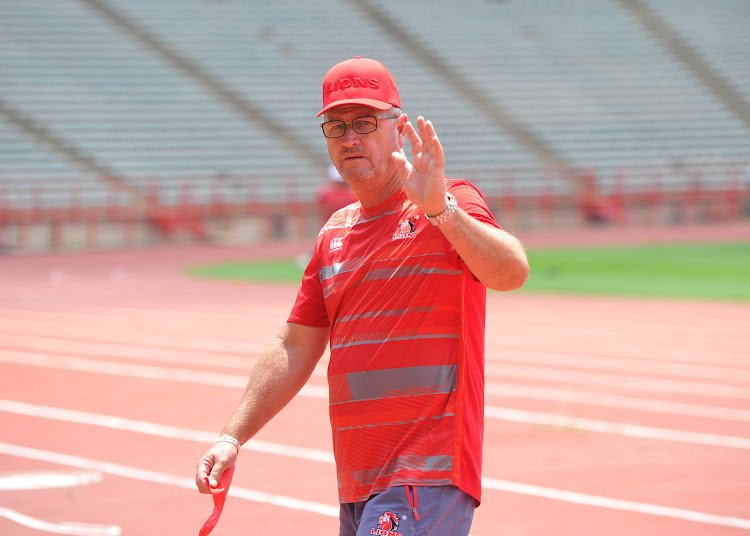 The Emirates Lions head coach Swys de Bruin was not happy at how his team was plummeted by the visiting Vodacom Bulls at Ellis Park.
Image: Sydney Mahlangu/ BackpagePix

With his side staring down the barrel‚ Swys de Bruin reluctantly reached for the blowtorch at half time.

His fiery rage did the trick as the Lions recorded one of Super Rugby’s more memorable come-from-behind wins over the Melbourne Rebels at Ellis Park on Saturday.

His side had gone into the sheds 26-5 down before matters were compounded moments after the resumption when the Rebels stretched their advantage to 33-5.

“There were one or two words that came out badly. Sorry about that‚” he said while leaning over to the Lions’ sheepish looking captain Malcolm Marx.

“But maybe it was time to lay the marker down once and for all. I don’t think I’ve lost it like this before. I know how good these guys can be and they were not‚” said De Bruin about a desperately poor first half.

The Lions scored 28 unanswered points before the result was balanced on the penalty attempt of young Gianni Lombard after the final siren.

Lombard coolly converted from an acute angle to give the Lions a famous win.

“I had to make sure we got back to process‚” said De Bruin about his halftime pep talk.

“The guys were wide eyed like I had not seen before. Luckily we focus on scoring a try every 10 minutes and just get into the process. We had to do the things we know we do well. Thankfully it worked.”

The Lions had delivered an abject first half performance.

In the first half however the Lions dug a deep hole for themselves. Their line-out and maul was well below par‚ handling errors caused frustration‚ while two intercept tries off passes by Ruan Combrinck and Elton Jantjies compounded matters.

“They know the eyes have to do the work before the hands do the action‚” De Bruin said sagely.

While his starting team slowly turned the tide in the second half‚ substitutes Lionel Mapoe and Andries Coetzee gave the Lions real impetus once they made it onto the park.

Mapoe was outstanding in carrying the ball into the heart of the Rebels defence‚ while his try was perhaps a microcosm of the never-say-die spirit that pervaded the Lions in the second half.

Up front though Kwagga Smith‚ who sustained a groin injury and is a doubtful starter for Saturday’s game against the Sunwolves‚ Carlu Sadie‚ Marnus Schoeman and Marx made the hard yards.

It meant the Lions inexorably closed the gap on the tiring Rebels who were increasingly prone to error and law infringements.

It cost them‚ especially when Billy Meaks was sin binned and the Lions pounced with three tries during the centre’s banishment.

“I’ve never seen a game where the penalty count was 20 to one‚” sighed an incredulous Rebels coach Dave Wessels.

With the match in the balance after the final siren the Rebels had to feed the scrum inside their own 22. The Lions had one last throw of the dice by delivering a power scrum forcing the Rebels into one more‚ fatal penalty.

“That was a miracle on its own‚” De Bruin beamed.

In that moment however his decision to earlier withdraw Elton Jantjies‚ who had been kicking well‚ invited scrutiny.

“When I pulled Elton I knew it might come down to a vital kick. Neil (de Bruin‚ skills coach) sat next to me and he said he trusts Gianni to slot a pressure kick.

“Stars are made for big moments and to slot that kick there‚ maybe he’s a future star‚” said De Bruin.

Marx was never in doubt about the decision to go for the poles. “I just pointed to the poles and he (Lombard) said ‘don’t worry‚ I’ve got you.”