Lions fight back to stun Rebels in Ellis Park thriller 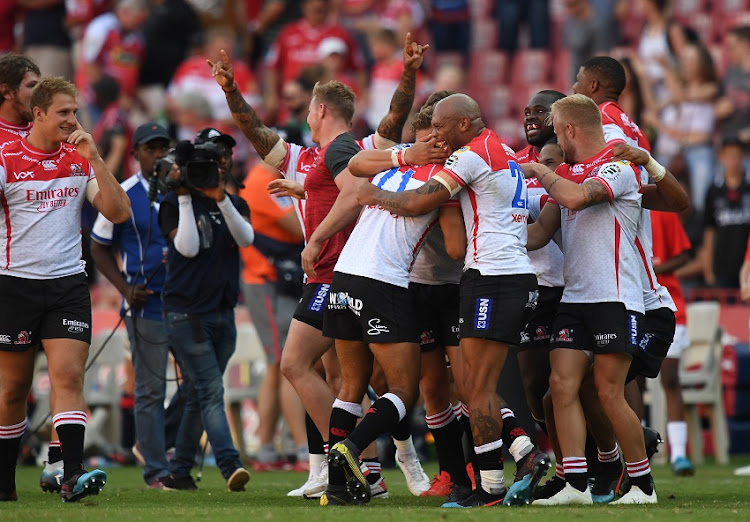 That the result of this match rested on the accuracy of one kick was perhaps unfair on everyone here. Least of all on the Lions’ young replacement flyhalf Gianni Lombard.

The rookie who was on for Elton Jantjies who was substituted with 10 minutes to go, took his time as those in attendance were reduced to a hush and no nails left to gnaw.

Lombard, with a delayed approach struck the ball sweetly, dead centre through the middle of the uprights to hand the Lions one of the most unlikely wins you are likely to see.

The clichéd ‘game of two halves’ doesn’t begin to convey what had transpired here on Saturday.

The Lions were dead and pretty much buried at 33-5 after 43 minutes but the staged a comeback that even tops the 22-3 deficit they overturned against the Hurricanes in their splendid rear guard action in the semi-final in 2017.

The Lions’, wholly outplayed in a dreadful first half punctuated by error and misadventure, found their mojo in the second half, but not before the Rebels streaked even further ahead immediately after the break.

They were staring down both barrels and few held out hope for a miraculous revival but the hosts’ forwards with Kwagga Smith, Marnus Schoeman, Carlu Sadie and Malcolm Marx leading the charge slowly, but inexorably found a foothold as the Rebels were pegged onto the backfoot.

With the sudden surfeit possession rookie fullback Tyrone Green, centre Wandisile Simelane also started sowing the seeds of a Lions comeback. Green was a live wire but the player who provided real spark was substitute centre Lionel Mapoe who gave shape and impetus to that earlier installed belief.

The Lions built pressure and the Rebels were forced into penalties and ultimately lost Billy Meaks to a yellow card. It proved costly.

While he served his temporary banishment Meaks could only watch on as the Lions ran in three tries.

The crowd was in raptures at Lombard struck the winning penalty but the Lions are in need of much revision before they take on the Sunwolves in Singapore next week.

It wasn’t as if they were in a first half slumber. You are not that prone to error while snoozing.

The well organised and drilled Rebels were alert and quick on the draw to any opportunity that fell their way.

They displayed greater clarity in their game plan as the Lions delivered an first half performance.

Not that the Lions should have been complacent. The Rebels arrived here as one of only two teams still unbeaten in this season’s Super Rugby competition and for the first half hour the visitors showed what has earned them the right to be mentioned in the same breath as the Crusaders as the only unbeaten teams.

When the Lions got themselves into promising positions they fluffed their lines. They lost their capacity to maul. Their driving maul proved ineffectual, albeit again, against a well organised unit.

The Rebels got onto the board with remarkable ease as Will Genia doubled around  before skip passing to the unmarked Reece Hodge who went over in the corner.

They scored four more tries before the Lions staged a comeback for the ages.