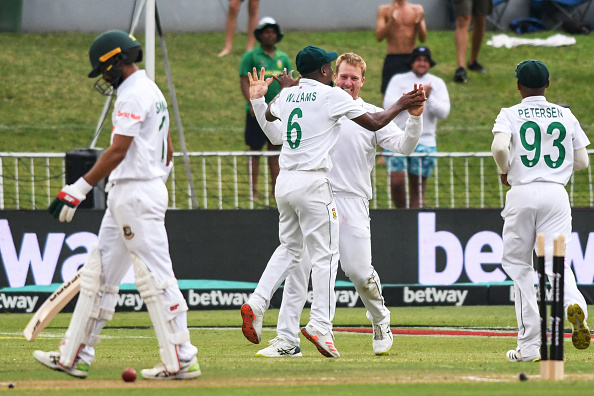 Proteas spinner Simon Harmer has explained that signing the controversial Kolpak deal with Essex in 2017 was about seeking playing opportunities and nothing else.

Harmer, who is playing for the Proteas for the first time since 2015, returned with highly impressive bowling figures of 4/42 on day two of first Test at Kingsmead Stadium on Friday.

Because of his excellent bowling performance on the increasingly turning pitch at Kingsmead, the Proteas restricted Bangladesh to 98/4 at stumps and with a lead of 269 runs.

“I had my reasons for signing my Kolpak, I can’t speak for everybody but for me it was about opportunity,” he said at stumps of day two.

This was after SA put together a strong total of 367 during their first innings where Temba Bavuma was agonisingly removed on 93 for his second dismissal in the nineties.

It was an action-packed day dominated by Temba Bavuma’s dismissal in the nineties, Simon Harmer’s bowling, ten wickets and the the threat of bad ...
Sport
4 months ago

Bavuma, who has gone through 2,278 days since he scored his one and only Test century in 2016 against England in Cape Town, will have to wait a little longer for his second Test ton.

Other notable contributors were captain Dean Elgar with 67, Sarel Erwee with 41 and Harmer with 38. The only disappointment was Mulder, who was dismissed for a duck.

Harmer said there was a lot of media coverage on his decision but all he wanted was more playing opportunities.

“There was a lot of media and press about how lucrative playing county cricket is with the British pound. For me it was about opportunity, I was only playing one format for the Warriors when I left here and I went over there and played all three formats and for that’s what it was about.

“I was pained with the same brush as everybody else, which is fine, but at the end of the day currency is wickets, performances and winning games of cricket and trophies. I sort of put my blinkers on and tried to achieve those things.”

Harmer added that his four wickets show that he can play at the highest level.

“I definitely think there is a feeling of vindication after coming back because there are still questions whether I am good enough to play international cricket.

I have done it at country level for Essex, I have come back to the Titans and I have taken wickets.

“There are questions whether I am still good enough to play international cricket.

Four wickets doesn’t mean I am good enough for international cricket but it has been good to come and putting in the performances.”

Harmer also made a solid contribution of 38 runs, but he wish he could have got a fifer.

“My bowling puts bread on the table, so I think a fiver but I have been working very hard on my batting with Justin Symonds and Matthew Reuben at the Titans.

“I have put some long hours, so it is good to finally see some rewards, the domestic competition did not go as well as I would have envisioned with my batting but I am glad that I got some runs on the board and gets some wickets this evening.”

Captain Dean Elgar scored a fast-paced half-century to help SA reach 95/0 at lunch on the opening day of the first Test against Bangladesh at ...
Sport
4 months ago

SA have included two spinners in their team to take on Bangladesh in the first Test at Kingsmead Stadium in Durban while top-order batsman Ryan ...
Sport
4 months ago

SA were bowled out for a first innings total score of 367 by Bangladesh during the second session of the first Test at Kingsmead Stadium in Durban on ...
Sport
4 months ago
Next Article