Warriors blinded by the light of the Lions' star power 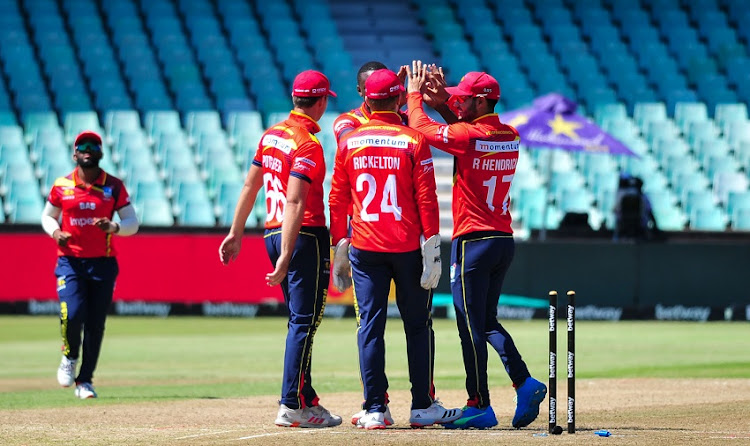 The Warriors found themselves blinded by the light emitted from the galaxy of stars the Lions threw into their opening T20 Challenge clash at Kingsmead on Saturday.

The Lions chalked up a four-wicket win with Rassie van der Dussen (64 off 41) and Kagiso Rabada (3/23) showing their class.

It was always going to be a tall order for the Warriors against a Lions team studded with internationals. They could even afford to leave Wiaan Mulder out of their starting team.

Van der Dussen strode to the crease with the Lions in a spot of bother on 19/2 in the third over but he batted with composure and assuredness to take his team within reach of the 158 victory target.

He batted well in concert with Temba Bavuma (41 off 35) but both fell to shots that just gave the Warriors a glimmer of hope.

When they got together‚ however‚ the match was potentially in the balance in the Lions’ powerplay when an all-star cast of Proteas protagonists Anrich Nortje and Glenton Stuurman engaged in a brief battle of wills against the decorated batsmen.

The Lions' pair won that round bringing up their 50-stand off 36 balls and particularly profited from the Warriors’ propensity of dropping it short.

However‚ the one bowler who troubled them was left-arm wrist spinner Lizo Makhosi. He applied a deft hand at a tricky art hitting his length from the get-go forcing the Lions’ heavyweights to tread lightly.

Makhosi plays with pluck and looks a real prospect.

In the end he got Bavuma when he was on the end of a catch off Aya Gqamane.

The Warriors won the toss and opted to bat under clear skies but were bowled out for 157 one ball inside their full allotment.

Although Sisanda Magala took four wickets‚ it was Rabada who set the tone. He looked a cut above bowling with control and the odd bit of menace to peg the Warriors onto the backfoot.

Magala got the wickets but he sprayed it and went for 37 in three overs and five balls.

He delivered a real mixed bag. In the fourth over the rotund seamer served up a distinctly mediocre opening burst but significantly his last delivery dislodged Warriors danger man Jon-Jon Smuts.

Soon Lesiba Ngoepe fell to a lamentable shot. While Smuts can be deemed unlucky Ngoepe's sin was he tried to clip Rabada first ball through midwicket. The ball looped into the covers where the catch was completed.

Rabada then cleaned up Gihan Cloete and suddenly the Warriors had concerns at 36/3.

Wihan Lubbe arrived at the crease with a healthy strike-rate of 139 and the hope of resurrecting the Warriors’ innings but was struck on the side of the head second ball by Rabada.

It looked a nasty blow and he was duly subjected to the mandatory concussion test that involved his eyeballs following the physio’s finger and a not-so-testing line of enquiry.

He dusted himself off‚ delivered some lusty blows and looked to be on course to a meaningful contribution before Rabada was back in the action with smart catch at backward square leg of slow left armer Bjorn Fortuin.