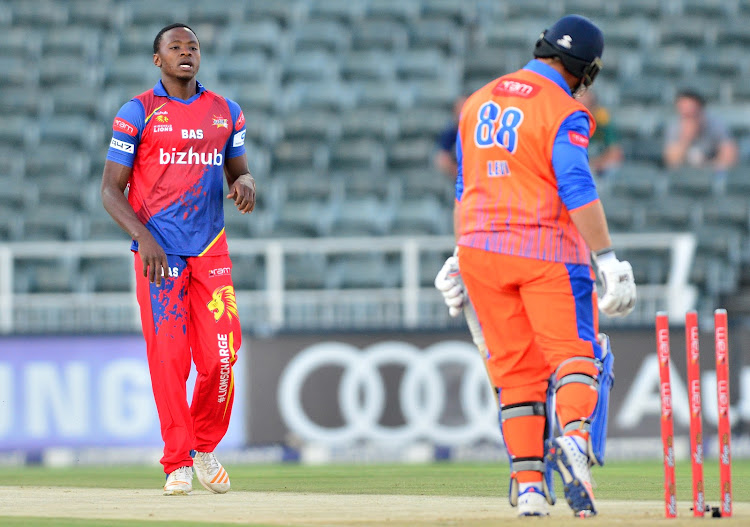 Kagiso Rabada says he is happy to be back playing for the Imperial Lions in the CSA T20 Challenge.
Image: Samuel Shivambu/BackpagePix

The Cricket South Africa (CSA) T20 Challenge packed with a strong contingent of Proteas players will start in a bio-secure bubble in Durban on Friday with a lot at stake.

The tournament will kick off with a double header as the Titans and the Knights (10am) get the show on the road and the Dolphins and Cobras (2.30pm) clashing in the later match at Kingsmead.

The sponsorless CSA T20 Challenge will be played at the same venue from February 19 to 28.

CSA director of cricket Graeme Smith said it is “contracting season” for national team agreements and urged players to use the T20 tournament and the remaining 4-Day series to stake their claim for places.

“Around the contracts and around the national teams I think there are lots of places up for grabs‚” Smith said.

“We are going into a contracting season now with the 17 contracted players. With the restructuring of the game it is an important time for the selectors and the team management to get their strategies right and to identify who the right people to move forward with are.

“What I want to see is people performing. For me‚ my goal for the next coming months is to see all our players stepping up and to see who performs. All national team players will be involved in that as well.”

The postponement of the home three-match Test series against Australia‚ which was to take place in March and April‚ means that all but two Proteas players are available for the CSA T20 Challenge.

There will be no less than 20 national players involved on the opening day.

“It feels great to be back playing for the Lions‚” said Proteas speedster Kagiso Rabada‚ who will be steaming in for the Lions against the Warriors at 10am on Saturday.

Rabada was part of the core of the Proteas team rested for the T20 series in Pakistan after the Test series and should be refreshed for the CSA Challenge.

“It feels really good to come back and just play with some of the guys I played with before‚ even at school level‚ just to contribute to a team that has always been close to my heart‚” he said.

Lions coach Wandile Gwavu said he is pleased to have all his Proteas players back.

The last time the CSA T20 Challenge played in 2019 it was won by the Lions but Gwavu said this edition is a whole new ball game.

“We’re nearly two years on from that now and the dynamics have changed. We need to play well again like we did then‚ but we’re confident and determined to do well‚” Gwavu said.

With the T20 World Cup scheduled to take place in India later this year‚ the CSA Challenge also offers a chance for players to throw their names into the hat.

“Obviously being a World Cup year‚ the players will have more eyes on them and this is a wonderful place to show what they are capable of‚” said Cobras coach Ashwell Prince.

The tournament will comprise of 17 matches in total‚ with each team playing the other once before the franchise with the most points then automatically secures a place in the final on Sunday‚ February 28.

The teams ending second and third will play a qualifier a day earlier to determine who will feature in the deciding game.

CSA T20 Challenge this weekend (all at Kingsmead Cricket Ground) -