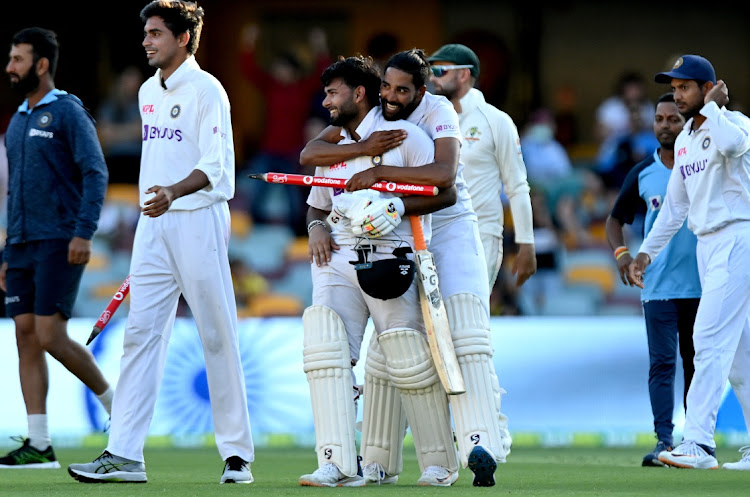 Rishabh Pant and Mohammed Siraj of India celebrate victory after day five of the 4th Test Match in the series between Australia and India at The Gabba on January 19, 2021 in Brisbane, Australia.
Image: BRADLEY KANARIS

Kohli had returned home to attend the birth of his daughter after the opening test loss, leaving behind a deflated side who were skittled out for 36 in Adelaide - their lowest innings score in 88 years of test cricket.

Under stand-in skipper Rahane, India levelled the series in Melbourne and drew in Sydney before triumphing in Brisbane to retain the Border-Gavaskar trophy.

"WHAT A WIN!!! Yessssss. To everyone who doubted us after Adelaide, stand up and take notice," Kohli tweeted after India's three-wicket victory at the Gabba.

Modi also took to Twitter to congratulate the team, who showed great resilience despite losing their entire frontline attack to injuries heading into the Brisbane decider.

"We are all overjoyed at the success of the Indian Cricket Team in Australia. Their remarkable energy and passion was visible throughout. So was their stellar intent, remarkable grit and determination..." he said.

The Indian cricket board announced a 50 million Indian rupees (US$683,504) cash award for the team.

Former England captain Michael Vaughan, who was among those who had predicted a 4-0 humiliation for India, hailed what he called "one of the greatest if not the greatest Test victory of all time.

Ex-Australia captain Ricky Ponting, who had made a similar prediction, was disappointed with the performance of the hosts.

"The cold hard facts of it are pretty much that was the India A team that played this test match and (India) still won," Ponting told www.cricket.com.au.

"That's a real concern for Australia."

Quinton de Kock has lauded the security arrangements laid out for South Africa on their first tour of Pakistan in 14 years and says the players are ...
Sport
2 months ago

England secured a seven-wicket win over Sri Lanka in the first test on Monday but there will be only muted celebrations at the tourists' hotel as ...
Sport
2 months ago
Next Article