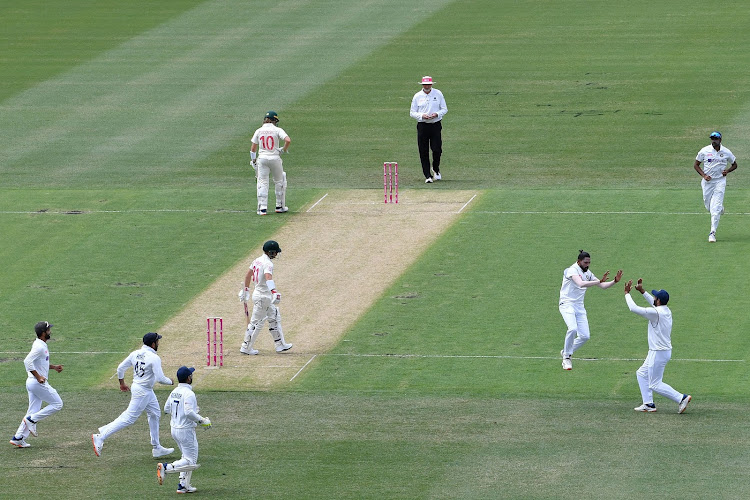 India's Mohammed Siraj leaps in the air as he celebrates a wicket. Siraj finished with five wickets in the match.
Image: AAP Image/Dean Lewins via REUTERS

Injury-ravaged India will chase 324 runs for a fairytale victory in the fourth test decider against Australia as an epic series that has ebbed and flowed draws to a fitting climax on the final day at the Gabba in Brisbane.

At the end of a rain-hit day four, India's batsmen pondered a wicket laden with ominous cracks while Australia fretted over the fitness of pace spearhead Mitchell Starc and hoped the weather would behave on day five.

Australia may also wonder whether they waited too long to unleash their bowlers, with rain bringing an end to Monday's play after only 1.5 overs of India's second innings after tea.

India, after bowling Australia out for 294, were four for no loss, with Rohit Sharma four not out and fellow opener Shubman Gill yet to score.

Australia have a maximum of 98.1 overs to beat India and seal the series 2-1, but it was only a week ago that the home side failed to knock over Ajinkya Rahane's battered team in 131 overs in the drawn Sydney test.

The hosts must win the match to reclaim the Border-Gavaskar trophy, while holders India need only a draw to retain it two years after their breakthrough 2-1 win in the 2018/19 series in Australia.

Compounding the challenge, Australia's attack may also be undermanned, with left-armer Starc seen clutching his hamstring.

"He has played through some injuries before and got the job done so he’ll be hopefully good to go tomorrow.

"The wicket is certainly different to what it is in Sydney. There’s a bit more happening here.

"We saw a few balls shoot up today, a couple kept a bit low, a couple went off cracks which is always playing on the batters’ mind."

The highest successful chase in a Gabba test was in 1951 when Australia finished 236 for seven, but there have been big scores in recent years.

Pakistan racked up 450 in the fourth innings at the Gabba in a lost cause in 2016.

That India remain in the hunt is an achievement in itself, with not a single first-choice bowler in the team due to a horrendous injury toll.

In a series that has produced a string of unlikely Indian heroes, Mohammed Siraj, the de facto pace leader in only his third test, finished with an innings haul of 5-73 on Monday, taking the wind out of Australia's sails as they tried to quicken their scoring.

He had some assistance from the pitch, with balls rearing out of cracks and others staying low.

"We saw some cracks today and it will play on the batsmen's minds. It won't be easy tomorrow but our batsmen will be prepared," Siraj told reporters.

Smith was one of Siraj's victims, out for 55 when he gloved a catch to Rahane after a ball pinged steeply off the wicket.

In his second test, Shardul Thakur grabbed 4-61 in the innings, snaring opener Marcus Harris (38) and tearing into the tail with the wickets of all-rounder Cameron Green (37) and wicketkeeper-captain Tim Paine (27).

Australia's tail showed customary resistance, with Pat Cummins (28 not out), Nathan Lyon (13) and Josh Hazlewood (9) boosting the victory target to ensure India will have to fight tooth and nail to deliver the fairytale finish.