Trainer Perreira brings out the best in Ngebinyana

'We are now gunning for Bongani Mahlangu' 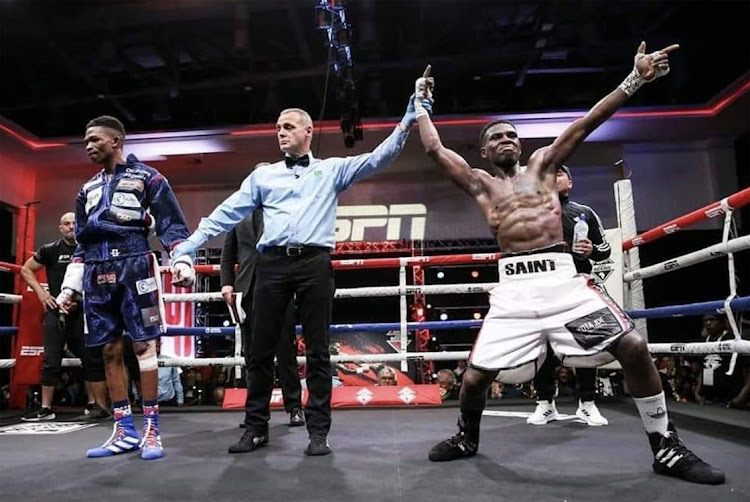 Sabelo “Saint” Ngebinyana proves to be an unpredictable fighter, especially to boxers that have not tasted defeat, says his trainer Bruno Perreira who has fine-tuned his fighting technic since they teamed up in 2019.

“Sabelo has never had a promoter to look at his best interest, so he was always been thrown in difficult fights where everything was just not on his favour,” said Perreira about left-handed fighter who had a very good start, chalking four stoppages on a trot in his early days.

He was matched with Athenkosi Dumezweni and Ngebinyana lost that fight. After the defeat, Ngebinyana came back strong to registered three more stoppages on a trot before he suffered a split points decision to Rofhiwa Nemushungwa.

Ngebinyana then beat previously undefeated Sikho Nqothole twice – for the WBA Pan African title and also for the then vacant national title.

The newly crowned champion from Queenstown failed in his attempt to add the ABU belt in his collection against Landi Ngxeke. He fought these fights under different trainers and those contests were also staged by different promoters.

Golden Gloves then matched Ngebinyana with Ricardo Malajika and this time with Perreira in his corner. Malajika was undefeated but lost to Ngebinyana. Last month, Ngebinyana handed Mzuvukile Magwaca his first loss when they met in Sandton over eight rounds.

“Old Bones” as Magwaca is popularly known, was a favourite to win that fight, which was his second come-back after four years.

His promising career, which saw him win the WBF junior flyweight, IBO Continental flyweight, WBA International, WBF and IBF Inter-Continental bantamweight titles, was put on hold by thugs who shot him and broke his left leg during a robbery at his house in the Western Cape in 2018.

Magwaca last fought in 2017. He made a comeback in April and knocked out Sanele Maduna in the second round which was his 12th knockout in 21 wins.

Ngebinyana, whose corner was manned by Perreira and accomplished Damien Durandt, outboxed Magwaca over eight rounds. Ngebinyana improved to 15 wins against five losses.

“We are now gunning for Bongani Mahlangu,” said Perreira in reference to the newly crowned SA featherweight champion who made headlines by winning the national title at the age of 42.

Former two-weight SA boxing champion Mabhuti “Macman” Sinyabi has received well wishes from Cindy Nkomo ahead of his first attempt at conquering the ...
Sport
2 weeks ago

Middleweight Simnikiwe Bongco survived a knockdown to secure SA’s first boxing medal at the Commonwealth Games since 2014.
Sport
2 weeks ago

Boxing in this country doesn't need a CEO with degrees but short on ideas of how to take the sport forward and completely in the dark about what ...
Sport
2 weeks ago

Gideon Buthelezi has admitted blundering badly by risking his life to starve himself to the point where he was a walking corpse just to make the ...
Sport
2 weeks ago