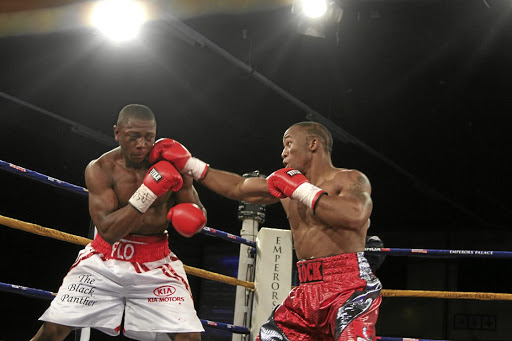 Flo Simba exchanges blows with Thabiso Mchunu. Simba is returning to action against Joshua Pretorius on Thursday after a hiatus of three years due to his medical condition. / Bafana Mahlangu

Comeback heavyweight hopeful Flo Simba is a completely improved boxer, and doubting Thomases must be at Presleys in Boksburg on Thursday night to bear testimony to the claim made by the boxer's manager, Patrick Bonyeme.

He said that the hard hitter - whose power earned him the moniker "Demolition Man" - was a far better boxer than he was before teaming up with new trainers John Tshabalala and Bobo Mata.

Simba returns to action after a three-year hiatus which was caused by his medical condition. He said he needed time off to pay attention to his diabetes. Simba said the Centre for Diabetes and Endocrinology sponsored him with "very good" equipment to manage his sugar levels.

He will take on Joshua Pretorius in the main bout of the Real Steel Promotions tournament.

A low blow for boxing

Choice of clueless MC at Arnold Classic Africa a farce.
Sport
4 years ago

"Simba will give everything he has to justify his return to the sport of boxing," said Bonyeme. "He is under new management and new trainers who have eliminated all his previous mistakes. I wish you could have seen him in sparring with Ruann Visser [SA heavyweight champ], Kevin Lerena [IBO cruiserweight champ] and Vlad Sirenko."

Simba, 28, remained undefeated after nine fights and he seemed to be on track for greatness when he won the IBO Youth belt in 2011.

But his career took a nosedive, and the final nail was when he was stopped in the first round by a washed-up Khayeni Hlungwane in 2015. It was Simba's last appearance in the ring. He renewed his licence this year, and it was agreed that he must be given the chance to box subject to doctors monitoring his sugar levels.

Bongani Magasela previews a weekend boxing bonanza that will see action start in Johannesburg tonight, before moving to Eastern Cape tomorrow and ...
Sport
4 years ago

On the other hand, Pretorius is a toughie who did a number on Warren le Roux, stopping him in the fifth round in April. Pretorius, from KwaZulu-Natal, looks solid but a fight against Simba looks to be a miscalculation from his management. He has only three wins and a loss.

Promoter Andre Thysse has included in his card promising junior middleweight rookie Etienne van Niekerk - the Sebastian Rothman-trained boxer who will take on Mandla Mpofu. Damien Durandt's charge Ricky Tshabalala will be up against Simba's stablemate Dido Mukhanya in the middleweight class. Alfonso Tissen will welcome Chimwemwe Chiotcha from Malawi in the main bout over eight rounds in the super middleweight class. Action begins at 7pm.