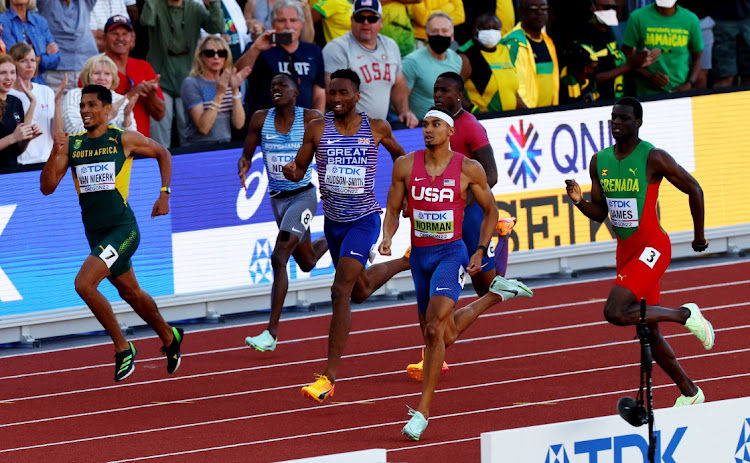 Wayde van Niekerk, Britain's Matthew Hudson-Smith, Michael Norman of the US and Grenada's Kirani James in action during the final.
Image: REUTERS/Mike Segar

Wayde van Niekerk had the will but not the legs as he ended fifth in the men’s 400m final on Friday (Saturday morning SA time), his first final in five years.

Van Niekerk, running in lane seven, was challenging strongly for third going into the home straight, but his lack of championship competition betrayed him as he faded over the final 50 metres or so, with American Michael Norman winning the slowest one-lap race in more than 10 years.

Norman’s compatriot Champion Allison was fourth in 44.77 and Van Niekerk, who turned 30 on the opening day of this meet last Friday, fifth in 44.97.

His 44.58 season’s best would have been good enough for the podium, but the thing about championship running is it requires the fitness to get through three rounds, going faster each time.

Henricho Bruintjies started in 10.78, followed by Emile Erasmus who clocked 9.06, the fastest time of both heats, going quicker than even newly crowned 200m world champion Noah Lyles of the US.

Clarence Munyai went around in 9.52 and then Akani Simbine, fifth in the 100m final, took it home in 8.95, the second-best anchor leg of the second heat and and third-fastest overall.

If Erasmus can hold his form, with Bruintjies and Munyai shaving time off their performances, SA could win a berth on the podium. They finished fifth at the last championships in 37.73, having set a 37.65 national record in the heats, but two of that team, Thando Dlodlo and Simon Magakwe, have since been suspended for doping offences.

Prudence Sekgodiso finished fifth in her 800m semifinal in 2min 00.01sec, failing to win a spot in the final. It was better than her 2:01.60 effort in the heats, but short of her 1:58.41 personal best, which would have been good enough to get through.

The 20-year-old should chalk her Eugene campaign down to experience.

Kaizer Chiefs founder Kaizer Motaung senior has had an honorary doctorate conferred on him by the University of Cape Town (UCT) during a graduation ...
Sport
2 weeks ago
Next Article