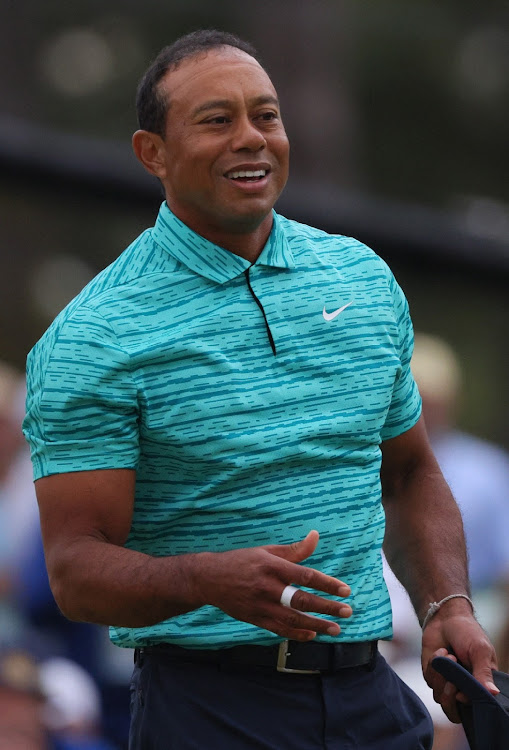 Tiger Woods on the 18th green after finishing the second round of the 2022 Masters.
Image: REUTERS/Brian Snyder

Tiger Woods fought back from a poor start in the second round at the Masters on Friday, earning a mini victory of sorts by making the halfway cut at his first tournament since a career-threatening car crash.

Though a distant nine strokes behind leader Scottie Scheffler, Woods goes into the weekend equal 19th at one-over-par 145 at Augusta National.

It would not be a bad spot for any 46-year-old, much less someone whose career seemed in jeopardy when he was badly injured in single-car rollover last February.

“I'm proud of the fact that my whole (support) team got me into this position,” he said.

“We worked hard to get me here to where I had an opportunity.”

It seems extremely unlikely that he will earn a sixth Green Jacket on Sunday — he was placed no worse than sixth after 36 holes in each of his previous wins — but he was hardly ready to throw in the towel.

The Masters officially gets underway on Thursday when Jose Maria Olazabal hits the opening tee shot but for many golf fans the year's first major ...
Sport
4 months ago

“Hopefully I'll have one of those light bulb moments and turn it on in the weekend and get it done,” he said.

“If you are within five or six going into the back nine, anything can happen. I need to get myself there. That's the key.”

Spectators with weekend tickets must have been holding their collective breath when Woods bogeyed four of the first four holes in cool, blustery conditions, a missed cut looming as a possibility.

He didn't do an awful lot wrong on what was the most difficult stretch of the course, a slightly mis-hit shot here and there, but it was starting to add up to a potentially big score.

“It was just like, OK, what else can go wrong?”

He was two under the rest of the day, shooting two-over-par 74.

And with his post-round interviews done he headed off for a long ice bath.

Asked how he felt, he said: “I don't feel as good as I'd like to feel.

“I expected to be sore and not feel my best for sure. I can walk this golf course. That's not a problem, but going ballistically at shots and hitting shot shapes off of uneven lies, that puts a whole new challenge to it.”

Tigermania returned to Augusta National in full force on Monday as a cagey Tiger Woods kept the golf world guessing on whether he will be in the ...
Sport
4 months ago

Tiger Woods offered no clues as to when he will return to the PGA Tour but did say he will be at the Masters in April to attend the traditional ...
Sport
5 months ago

Tiger Woods has 'awesome' time in first round of PNC Championship

Tiger Woods and son Charlie are in the hunt after a strong showing during the first round of the PNC Championship.
Sport
7 months ago
Next Article