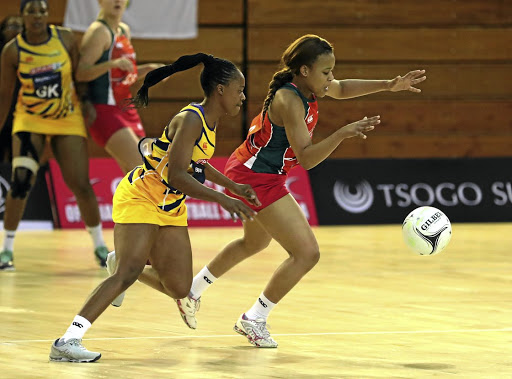 Siphosethu Kilani of the Aloes wards off a challenge by Sanele Buthelezi of the Sunbirds.
Image: Muzi Ntombela/BackpagePix

The Eastern Cape Aloes maintained their winning momentum on day two of the Telkom Netball League when they defeated the Northern Cape Diamonds 56-47 yesterday.

Player of the match, Aloes goal shooter Jody Vorster, was in a league of her own, dominating the shooting circle and making every goal count.

"I said to the players they must tell me what they did good and which areas we can improve on in these matches. The difference between yesterday and today’s game is that we worked on keeping our own center pass and remained focused throughout the game," said Aloes coach Sameshia Esau.

Diamonds coach Karien Opperman says her girls are still on the right track: "In netball, it’s not always about winning but it’s about how you perform, and they really performed well for me."

The North West Flames opened their campaign with a 46-53 defeat against the Southern Stings yesterday. The Flames only managed to win just four out of 10 games last year under coach Dr Elsje Jordaan, who is now the U21 coach. Stings coach Annelie Lucas made four changes to her starting seven for the game following Sunday's defeat against the Gauteng Jaguars and opted for different combinations which certainly worked in her favour.

Flames coach Lizelle Erasmus is confident that her team will pull out all the stops moving forward: "It’s always hard luck losing your first game. Even though the Flames have been playing for a long time, I have got ten new players and they are all hungry for success. I think first game jitters came into play because I utilised the whole bench, and everybody got a taste of this, so I am excited to see what’s coming."

The Gauteng Fireballs made it two wins in two games yesterday after beating the Free State Crinums 39-34.
Sport
1 year ago

Teams ready for battle as the netball league kicks off

Thirteen clubs vying for top honours in a bio-bubble.
Sport
1 year ago

Msomi: It's all systems go for netball in bio-bubble