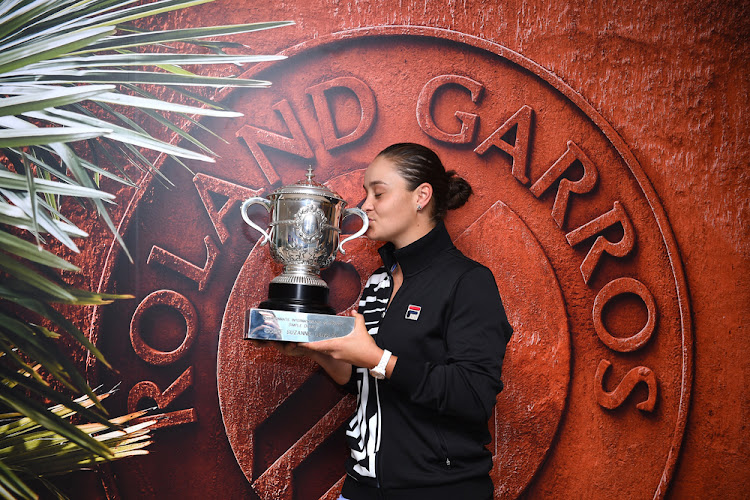 Home girl Ashleigh Barty is enoying her training camp while others are locked in hotel rooms.
Image: Rolandgarros.com

Ash Barty's brilliant year on the tennis tour has not shielded her from bouts of homesickness but the Australian is determined to keep working and stay world number one through the U.S. Open and beyond, coach Craig Tyzzer said.

The 25-year-old stayed home in Queensland in 2020 as COVID-19 spread around the world but she returned to the tour this year to claim Wimbledon and four other titles.

Now in New York warming up for the U.S. Open starting Monday, Barty will meet Vera Zvonareva in the first round.

With Australia's strict quarantine rules quashing any hope of a quick trip home to recharge, Tyzzer said Barty's five months away had been a struggle at times.

"It hasn't been easy. It's certainly been really tough to be away for that long and continue to keep playing and be fresh," he told Reuters from New York on Friday.

"But she's been really consistent just in her ability to play and front up for all the matches. She should be really proud of what she's done so far this year."

In a departure from the norm of elite players who relentlessly chase ranking points and prizemoney, Barty has taken two long and voluntary breaks from the sport.

Fed up with the grind of touring as an 18-year-old, she quit for a year-and-a-half and became a professional cricketer before returning to tennis in 2016.

She came back strong from that break, too, winning her first WTA singles title in Malaysia and soaring into the top 20 by the end of 2017.

When asked if resting for long periods before returning to dominate might be the ideal model for Barty's remaining tennis career, Tyzzer said: "I think if she had another long time at home, she probably wouldn't come back.

"She loves being at home, loves her family and the lifestyle of Australia. (But) I don't think it's a great formula to have her off for too long.

"When she's playing a lot of tennis, she's at her best."

Though resting for almost all of 2020, Barty was able to hold on to her world number one spot courtesy of a rankings rejig after the WTA Tour was suspended for five months due to the COVID-19 pandemic.

As U.S. Open champion Naomi Osaka stormed to the Australian Open title in February, questions were asked as to who was the true number one.

There is no debate now. Barty is more than 3,000 points clear of world number two Aryna Sabalenka in the rankings, with number three Osaka further adrift after opting out of Wimbledon.

Barty's maiden Wimbledon title was the fulfilment of a girlhood dream and she admitted on Sunday she was still processing it.

Tyzzer, however, said Barty was already setting other goals.

"Obviously she'd like to hang onto the number one spot and keep pushing to hold onto it as long as she can," he said.

"We've got a Grand Slam around the corner so there's another goal for her."

A Grand Slam winner on grass and clay, Barty will look to win her first hardcourt major at Flushing Meadows, where the raw power of Osaka has reigned two of the last three years.

Barty is more of an all-court player than a straight baseline pounder like Osaka, but the Australian's game is also suited for hardcourts, said Tyzzer.

She would relish a showdown with Osaka should both reach the U.S. Open final.

"As matchups go, she loves those sort of challenges and loves competing against the best players out there," said Tyzzer.