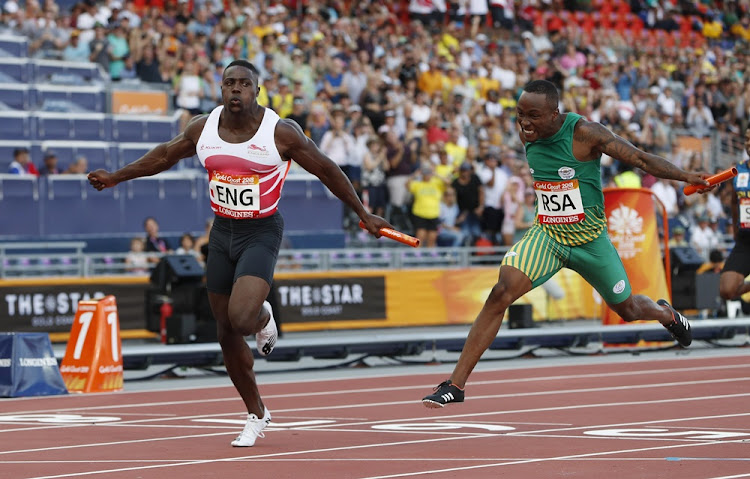 Harry Aikines-Aryeetey of England and Akani Simbine of South Africa run the last leg of the Men's 4x100m Relay at the Gold Coast 2018 Commonwealth Games in Australia on April 14 2018.
Image: REUTERS/Paul Childs

Wayde van Niekerk faces his toughest competition since returning from injury in a star-studded 200m shootout against Akani Simbine‚ Anaso Jobodwana and Luxolo Adams at the second Athletix Invitational meet at Ruimsig on Tuesday.

Wayde van Niekerk faces his toughest competition since returning from injury in a star-studded 200m shootout against Akani Simbine‚ Anaso Jobodwana and Luxolo Adams at the second Athletix Invitational meet at Ruimsig on Tuesday.

Athletics SA (ASA) and the organisers made the announcement in a statement on Thursday evening.

On paper this is arguably the greatest sprint race involving local rivals in SA history‚ but form belongs to Simbine‚ the reigning SA 200m champion‚ and Adams‚ the titleholder from 2018.

Olympic 400m champion Van Niekerk‚ owner of the 19.84sec SA 200m record‚ is still looking to prove he’s as quick on his reconstructed right knee as he was before the injury in late 2017.

Van Niekerk has been training long distance while waiting for the paperwork so he can board a flight to his new base in Florida.

He’s had a few races since 2019‚ but he hasn’t faced the calibre of opponent that he will on Tuesday.

Jobodwana‚ who struggled with injury for much of 2016‚ has yet to rediscover the form that took him to what was then a 19.87 national record while claiming bronze at the 2015 world championships in Beijing.

He has returned to the US coach who helped him to third spot six years ago‚ and having been training there for a year‚ there’ll be much interest in his performance.

Simbine proved he’s in good shape when he ran a comfortable wind-assisted 10.00 in his season-opening 100m at the first Athletix Invitational‚ also at Ruimsig‚ this past Tuesday.

His 200m personal best is 19.95‚ but he’s aiming to get a lot faster this season as he dreams of the sprint double at the Tokyo Olympics later this year.

It's not a certainty yet. Coach Werner Prinsloo has told Simbine — who has been in the world’s top five of the 100m since 2016 — that he'll have to improve his 200m time to enter that event in Japan.

Adams and Jobodwana are also among the 12 or so sprinters competing to make the six spots on SA’s 4x100m Olympic relay team‚ which is considered a strong medal contender.

They all have something to race for.