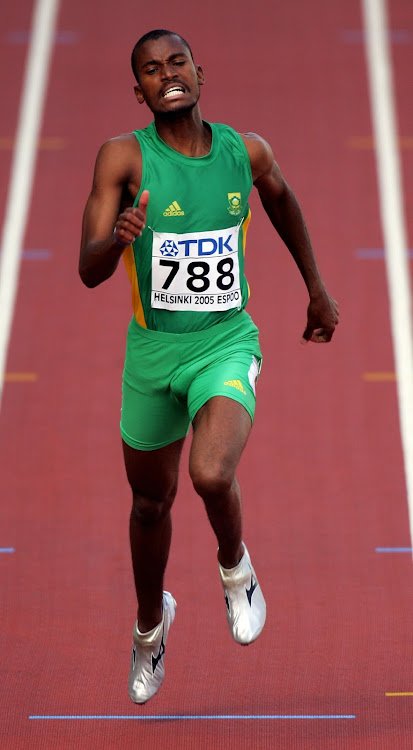 Ofentse Mogawane competes during the heats of the mens 400 Metres at the 10th IAAF World Athletics Championships on August 9, 2005 in Helsinki, Finland.
Image: Stu Forster/Getty Images

Commonwealth Games silver medalist Ofentse Mogawane is not the one to shy away from voicing his opinion.

The retired 39-year-old sprinter-turned-businessman says Athletics SA will consider themselves lucky if they can come back home with a medal from the Olympic Games taking place in Tokyo, Japan, in July.

Mogawane, who owns a second-hand car dealership in Tshwane, said the standard of athletics has dropped drastically and we have slim chances of returning from the Olympic Games with a medal.

"We are going to the Olympics, but it is hard to see us winning a medal. I went to the University of Pretoria to see them train and they look to be in great shape. But I do not see them making the podium in Japan," Mogawane told Sowetan yesterday.

Mogawane is planning to get his coaching badges in June under Athletics Gauteng North.

His younger brother Kefilwe is a 400m hurdles rising star and he spends most of his time coaching him and molding him into a promising athlete.

Track and field meetings are back in SA, but he says there is a shortage of competition locally and athletes have to go to Europe to up their standard. The IAAF World Relays Championships will be on May 1 and 2 in Poland.

Chederick van Wyk, Simbine, Clarence Munyai and Simon Magakwe will carry the hopes of the nation at the world relay championship.

Mogawane, who also won a silver medal in the 4x400m relays at the Commonwealth Games in Australia in 2006, threw his weight behind the team.

"It's quick and easy to make mistakes in the 4x100m relays. If one athlete makes a mistake, the whole team is out. I saw the four athletes train and we need to support them. The coach must get the first running order correct," added Mogawane.

SA's sprint ace Akani Simbine is expected to carry the hopes of the country at the World Relays champs and Olympic Games.
Sport
7 months ago

Vaccines 'encouraged' but not compulsory for athletes at Tokyo, says Coates

Athletes are being encouraged to get vaccinated against Covid-19 ahead of the Tokyo Olympic Games but it will not be compulsory, International ...
Sport
7 months ago
Next Article