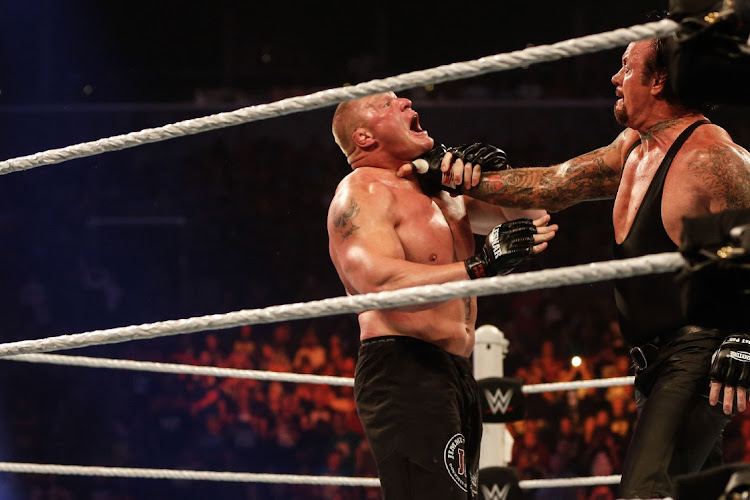 Brock Lesnar and The Undertaker battle it out at the WWE SummerSlam 2015 at Barclays Center of Brooklyn on August 23, 2015 in New York City.
Image: JP Yim/Getty Images

One of the most recognised WWE stars in the world, The Undertaker, real name Mark Calaway, is celebrating 30 years in WWE since his debut in 1990.

From the first time WWE hit SA screens, the star instantly became a fan favourite, keeping many captivated through his wrestling moves and horrifying “Deadman” persona.

The Undertaker is going back to where it all began – Survivor Series. The Deadman made his debut in WWE at the 1990 Survivor Series when he beat Hulk Hogan and earned his first title.

This year, the much-anticipated Survivor Series event is set to commemorate 30 years of The Undertaker, taking place at the Amway Centre in Orlando, Florida.

Though his fans will not be able to attend the event, they will still be able to celebrate this special moment by watching the event live through ThunderDome – WWE’s virtual viewing experience.

According to Sportsbible, The Undertaker has been named the best superstar in WWE history by fans ahead of Stone-Cold Steve Austin, Triple H, John Cena and The Rock.

One of his greatest career moments took place at Wretlemania 28 in 2012 when he faced WWE legend Triple H. The famous match between the two giants was titled ‘The end of an era’, as the two were set to make way for a new generation of WWE superstars.

The 2020 Survivor Series will be a one-night event where Raw goes up against SmackDown.

This year’s event will air live in SA on SuperSport 4 or DStv WWE Channel 236 on Monday morning, November 23 (2am).