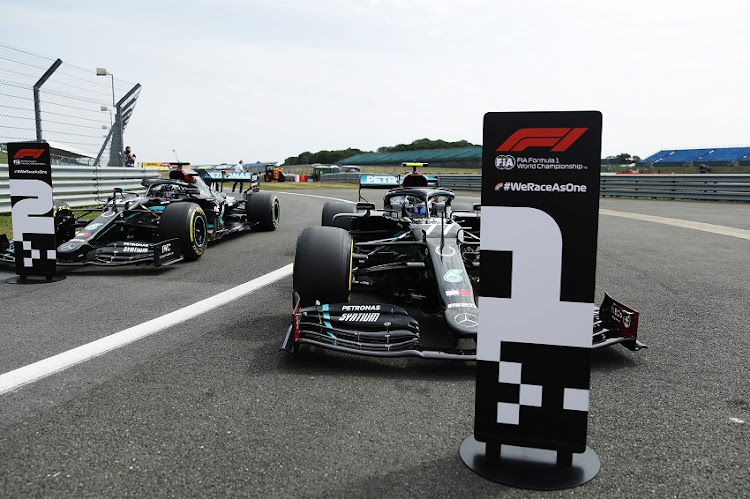 Bottas's 13th career pole, and first since the Austrian season-opener last month, ended six-times world champion Hamilton's bid for a fourth in a row and second at home on successive weekends.

It also ensured a reversal of last Sunday's British Grand Prix grid, held behind closed doors due to the COVID-19 pandemic, which Hamilton took his 91st pole and won despite a last lap puncture.

"Things are going to be a bit different to last weekend in terms of the strategy," said Bottas, who beat Hamilton by 0.063 seconds with a last flying lap on a hot afternoon.

"My expectations for tomorrow are nothing more than to win the race."

Pirelli have brought softer tyre compounds for Sunday's race, meaning teams should have to do two stops rather than risking excessive wear as they did last weekend.

The front row lockout was a record-extending 67th for Mercedes, who have taken every pole so far this season and won four out of four.

Hamilton congratulated the Finn on ending his own run of three in a row.

"Valtteri did a fantastic job today. Just a bit too quick for me," said the Briton, who leads his team mate by 30 points and looks set to equal Michael Schumacher's record of 155 podiums on Sunday.

"Ultimately he did a better job."

Mercedes were always expected to dominate but Hulkenberg, on a controversial weekend for his team who have been fined and docked 15 points for the copied brake ducts on their 'Pink Mercedes', excelled.

The German is standing in for absent Mexican Sergio Perez, who failed another COVID-19 test this week, for a second successive race. He failed to start at Silverstone last Sunday due to an engine problem.

Famous for never standing on the podium in 177 starts, Hulkenberg now has another chance just when he might have thought his hopes were over after being dropped by Renault at the end of last season.

"Last week, or last weekend, was really extreme," he said. "To come back in the paddock without any preparation, 10 minutes before the session, was challenging to say the least but good fun at the same time.

"I felt much better prepared for this weekend. I didn't think much, just trying to squeeze everything out of the car and the tyres and myself. Quite happy to be here."

Charles Leclerc was the highest-placed Ferrari driver in eighth, with his four-times world champion team mate Sebastian Vettel failing to make the top 10 session and qualifying only 12th.

Vettel will start 11th, however, after Renault's Esteban Ocon was handed a three place drop for impeding Williams' George Russell.

Ferrari had changed the engines in both cars before qualifying after Vettel suffered a failure in Friday practice but they clearly struggled.

Vettel even went to softer tyres to try and reach the final phase but to no avail.

George Russell again put tail-enders Williams into the second phase while Alfa Romeo, who won the very first world championship race at Silverstone in 1950, will line up with their cars at the back of the grid.