Ngcobo making her mark in the paper industry 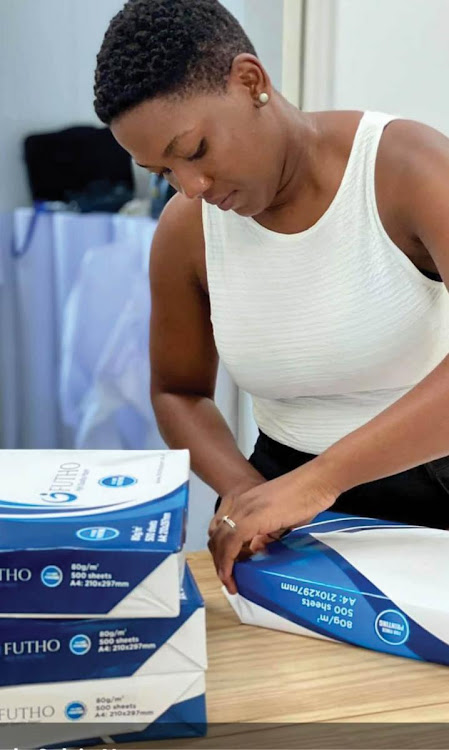 Mbalenhle Ngcobo is making her mark in the paper industry.
Image: Supplied.

When Mbalenhle Ngcobo (29) saw the amount of paper used in her former workplace, it sparked the idea to start her own brand – Ifutho Paper.

Ngcobo, from Ballito in KwaZulu-Natal, was working as an administrator at the University of South Africa in 2016 when – realising the office paper market was dominated by two brands, Typek and Rotatrim – she saw a niche in the market for a newcomer.

In 2017, Ngcobo started selling existing brands of copier paper to better understand the market and generate the capital she would need to launch her own paper brand. She also attended various incubator programmes to sharpen her entrepreneurial skills. In November 2018, her first paper prototype was produced. In 2019, she went into full production.

Ngcobo received assistance from the National Youth Development Agency (NYDA), which gave her funding of R50 000 in 2020.

Her company sources reels of paper from suppliers and uses its machines to cut them into A4 and A3 sheets, which are then packaged and sold under the Ifutho label.

Ifutho has two employees, one in production and one in sales and deliveries.

Currently, sales are mainly made in KwaZulu-Natal, but Ngcobo says there is demand for her product in Johannesburg and the Eastern Cape. She hopes to get a bigger machine to increase production and grow her market.

With her brand being new, she has to go the extra mile to market the business.

Ngcobo has given samples to potential clients to show that her product could be trusted.

Ngcobo says even though there is a global move towards a paperless environment, there are numerous operations that still rely on printing and copying, which she intends on targeting.

“Industries that rely on paper include schools, government departments and municipalities,” she says.

When the outbreak of the Coronavirus Disease (COVID-19) pandemic led to profit loss in the public transport business, three KwaZulu-Natal women taxi ...
SebenzaLIVE
1 month ago

Golden flames billow atop the stove. The cast iron pan heats up and the fragrance of frying onions fills the room.
SebenzaLIVE
1 month ago

Refilwe Manuel (26) grew up in a family of farmers. She was inspired to start farming at age 13 when her parents bought her broiler chickens.
SebenzaLIVE
1 month ago
Next Article