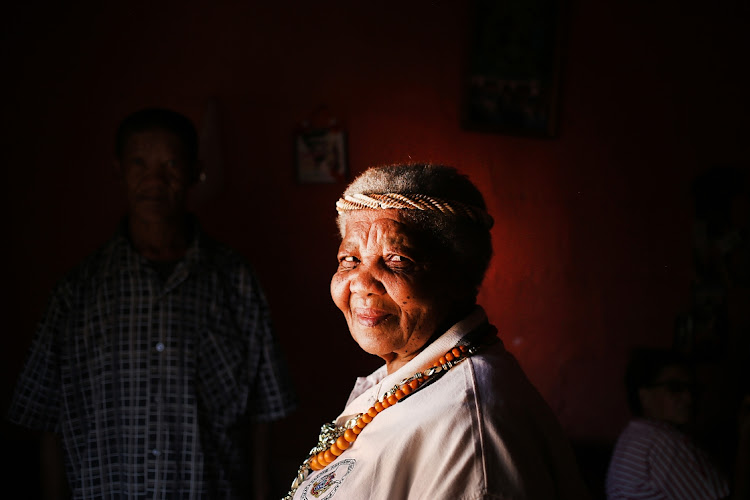 Katrina Esau is one of the last remaining speakers of the N|uu San language.
Image: Alon Skuy

Katrina Esau, a fluent N|uu speaker, has written a children's book in her native language which is regarded as one of the oldest and "critically endangered" languages in the world.

Esau, 87, one of the last remaining South Africans who can speak the ancient San language N|uu, has penned a children’s book in her mother tongue titled !Qhoi n|a Tjhoi (Tortoise and Ostrich/Skilpad en Volstruis).

The book is based on a folktale about an ostrich and a tortoise who come across a clay pot and decide to race for it. The tortoise wins.

Ouma Katrina, as she is fondly known, wrote the book with the help of her granddaughter Claudia Snyman, who also understands the language.

“Like most folktales, the story carries with it many meanings and meanders. It is more about friendship, strength, outwitting competition and how the tortoise got its shell," Esau said. “Folktales were and still are used to teach children about animals, nature and people.”

Esau has been a fierce culture activist in preserving the existence of N|uu. She established language school ǂAqe ǁX¡¯oqe (Gaze at the Stars) in her backyard in Upington, Northern Cape, to preserve, promote and share her knowledge.

Esau has received many accolades for her efforts. Her community crowned her Queen of the Western Nǁnǂe (ǂKhomani) San in 2015. A year earlier, former president Jacob Zuma presented her with the National Order of the Baobab in Silver.

“The Khoisan were said to be illiterate by Dutch colonisers. I want to break this myth as our language is written in its own style and format, characterised by numerous distinct clicks which influenced Nguni languages, such as isiXhosa and isiZulu.

“Tortoise and Ostrich will hopefully chart a path to remembering South Africa’s and Africa’s authentic identity. I want to see the book create awareness of the N|uu language and help take it forward,” she said at the recent book launch, hosted by the National Library of SA.

The book will also be translated to Tswana, Xhosa, Zulu and Nama, the most spoken language in Namibia. The department of sport, arts and culture described the book as an “ideal platform for telling the richness of the South African story”.

The book can be bought online at www.puku.co.za

Landa Mabenge always knew he was a boy. But the body he was born in didn’t reflect that.
SebenzaLIVE
1 year ago

Here's how frogs communicate our need for connection

If they aren’t being chased with a broom out the house, frogs mostly go unnoticed.
SebenzaLIVE
1 year ago