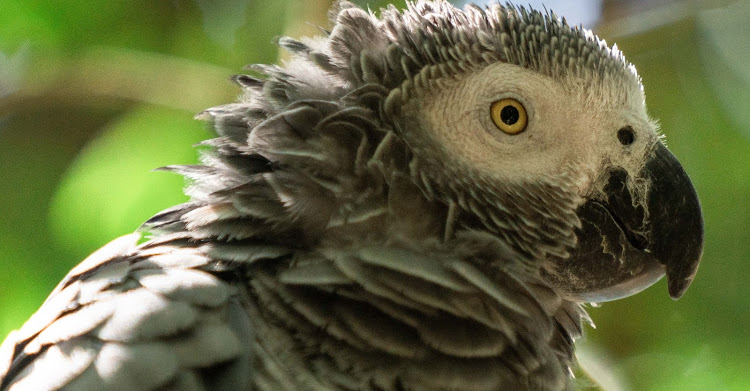 Grey wings flutter gracefully above the emerald roof of the forest. The bird swoops down towards an unoccupied branch, exposing the brilliant red flash of its undertail.

With its captivating beauty and intelligence, the African grey parrot is the world’s most popular avian pet. But this feathered friend is in such high demand that its wild population is on a dramatic decline.

By dispersing the seeds of fruit, they play an important role in propagating plants in the ecosystem.

The parrots weave their homes in the confines of tree crevices with their mate for life.

Social creatures, they even form villages of sorts, roosting in large family groups to create an intricate community network.

But contained in small cages without their kin, they can develop stress and anxiety.

When this occurs, they often find relief in self-mutilation by wrenching the feathers from their bodies.

And with a lifespan of up to 60 years in captivity, these parrots can be held behind bars for an insufferably long time.

As the demand for their companionship has increased, the illegal wildlife trade has claimed the freedom of thousands of African greys, to the point that the population in Ghana is close to extinction.

Deforestation has also taken its toll, laying waste to the endangered species’ homes. For parrots harmed or abandoned as pets, Birds of Eden sanctuary in Plettenberg Bay, South Africa offers them open space and the ability to socialise again.

But it’s only by leaving these animals in their natural habitat that future generations will see them flourish in the great outdoors.

A remarkable creature, the African grey deserves to enjoy life as all birds are meant to – wild and free.

Around 1.3 billion tonnes of food are thrown out every single year. One of the most discarded items is expired milk.
SebenzaLIVE
1 year ago
Next Article