Young Soweto entrepreneur does it all in just four years

A clothing brand from the streets 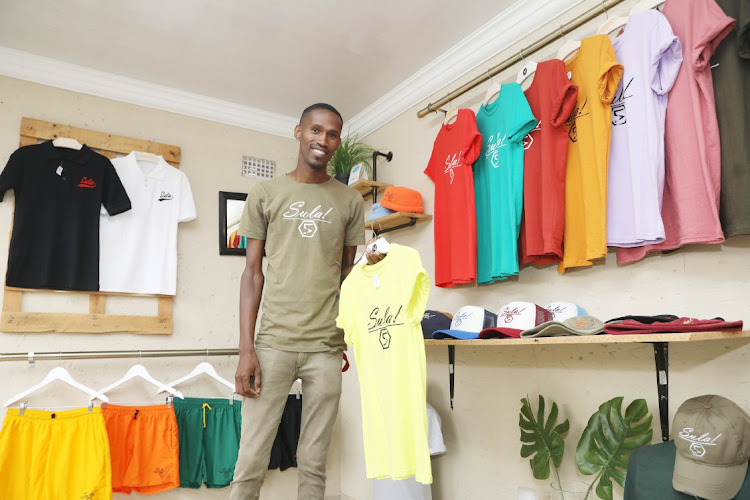 From selling clothes on the streets from a backpack to owning a clothing brand, Vusumuzi Makhubo has done it all in just four years.

The 34-year-old clothing designer has his own label – Sula Lifestyle, and runs his clothing store in Phiri, Soweto, where he sells branded T-shirts, shirts, caps, hoodies and shorts.

He currently manages one store. “The thinking behind the name Sula Lifestyle is to encourage a person to love yourself and dress well,” says Makhubo.

The lover of smart clothes says what got him interested in fashionable and stylish clothing is his love for dressing neatly.

“Growing up in the township, I loved dressing smart. I use to dress smart and people would give me compliments and that inspired me to start selling clothes and create a clothing business,” he said.

Makhubo said he started selling clothes in 2016 from a backpack in and around his home in Soweto. He said since he is also a DJ, he would also sell at various music events he performed at. He would also go to exhibitions to showcase his clothes. During this time he was initially operating from his parents’ home and would market his business through social media, and that’s how he would get orders from customers, particularly those living in Soweto.

When last did you rock an SA-produced footwear? If your answer is never, then think twice and get yourself a pair to start supporting local ...
Opinion
1 year ago

From the money he made from his early selling and DJing in 2018 he got a breakthrough and he was able to formally register the business and create a place in the form of a store where he would operate from.

The young entrepreneur does not only provide clothes for people in Soweto but as far as Eastern Cape, Durban (KwaZulu-Natal) and all places in the country.

Makhubo says his clothing is printed by his aunt in Soweto, who runs a clothes printing company. He sources his clothes from factories around Johannesburg.

An employee and co-worker of Makhubo at the store, Bafana Makhubo, said he joined the business in 2019 and believes it is “booming and picking up”.

Bafana says they have added tracksuits to their clothing enterprise.

Makhubo says in future he would like to open a clothing factory and help create more jobs for people, especially after the jobs bloodbath that was caused by the Covid-19 pandemic.

Two Soweto-based entrepreneurs running start-up businesses have been thrown a lifeline by JSE-listed agency Redefine Properties to develop their ...
SebenzaLIVE
1 year ago
Next Article