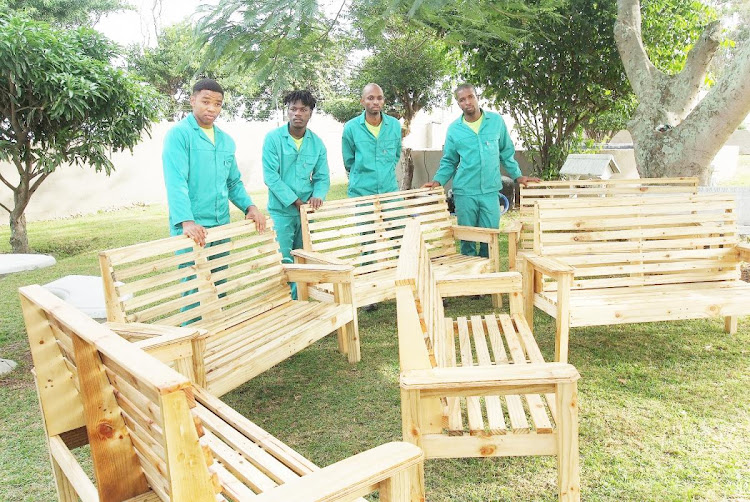 A group of trainees at the Sappi Skills Centre showing off some of the products which they made in their carpentry training. From left Siphelele Mthembu, Mduduzi Doncabe, Rony Mseleku and Halalisa Cele.
Image: Supplied.

The giant Sappi Saiccor Mill in Mkhomazi, KwaZulu-Natal, one of the biggest of its kind in the world is providing a welcome boost for job creation in its surrounding local communities.

Sappi made it clear that South Africa is still a good place to do business at the second South African Investment Conference held in November last year.

At this year’s investment conference, the company committed a R14 billion investment on its various plants across the country. The funds will be spent over a five-year-period on maintenance, expanding capacity, investing in new products and improving the company’s environmental footprint.

Mpho Lethoko, General Manager Communications, Sappi Southern Africa, said as part of the company’s investment in the country, the mill’s production capacity is being increased in a R2.7 billion capacity expansion project – known as Vulindlela.

“A further R5 billion will be spent over the next five years through maintenance and upgrade projects to decrease production costs, introduce new technology, optimise processes and future-proof manufacturing systems,” she said.

While permanent employees are being recruited to operate the new expansion, Lethoko said that to date some 1 035 workers were employed during the construction phase. Of these, 667 are from local communities.

Changing the lives of young people

Training for these contract workers took place at the nearby Sappi Skills Centre and at the Vulindlela training and on boarding facility.

“Since the opening of the Sappi Skills Centre on 1 February 2018, the lives of many young people in communities near the Sappi Saiccor Mill have changed for the better. This includes not just those who were seeking employment for the expansion project, but also some 160 youngsters who have been trained in various programmes aimed at empowering them to be self-sufficient,” said Lethoko.

One such young man is Sphesihle Ngcobo (22) from Danganya, a community near the Saiccor mill. He was accepted into the skills centre for training and completed a plumbing course. Along the way he also learnt life skills and business essentials.

“I have always loved working with my hands, and plumbing is like a puzzle, with all the pieces fitting together, and because I can use my hands, I really enjoy it,” said Ngcobo.

“When I was called for an interview at the mill, I was very nervous, but I would not have been able to get this opportunity of a job, if it wasn’t for the Sappi Skills Centre. I learnt a lot and I am very grateful,” he said.

Lethako added that Ngcobo couldn’t contain his excitement when he received a call from Sappi Saiccor to go for an interview.

“He is now employed as a pulp marker at the mill and has resolved to use his plumbing skills in part-time work, which he will offer free of charge to neighbours,” Lethoko said.

She added that young people have benefited from Sappi’s vision to empower youth with the necessary skills to enable them to create their own businesses or to seek meaningful employment.

“So far, this training has enabled seven of the young people from the local community to be accepted for the apprentice programme in mechanical and electrical engineering at the mill and 11 to find permanent employment in the mill,” she said.

Lethoko said a further six pre-apprentice candidates and six potential candidates joined a programme formed as a partnership between Sappi and the eThekwini Municipality. Thirty-four others are now running their own businesses, while others have found learnership or employment opportunities elsewhere.

“The training that Sappi offered at the centre has not just equipped them with new skills, but it has also enabled the young people to find a purpose and the inspiration and drive to succeed,” said Lethoko.

WATCH |The rebel refining his life’s rhythm with ballroom dance

“Judo is not from here.” Sixteen-year-old Lithemba Magajana stands tall, the bright white fabric of his judogi a striking contrast to the dusty ...
SebenzaLIVE
1 year ago
Next Article