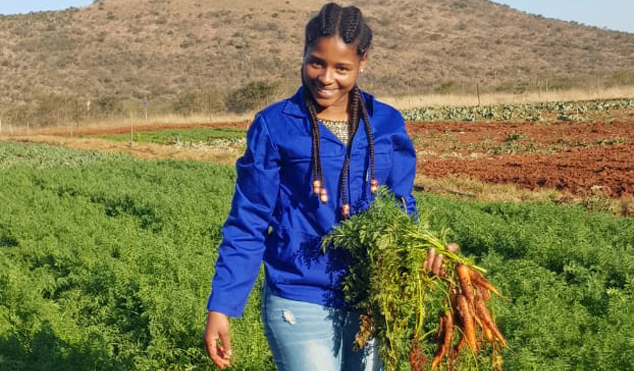 Siphesihle Kwetana (25), a budding agricultural entrepreneur from the rural Eastern Cape town of Cofimvaba, is growing a bright future for herself.

She is the owner of Siphe Development and Capacitation Agency, an agricultural business that produces spinach, cabbage, lettuce, broccoli, three types of peppers and carrots, among others.

“After completing matric in 2013, I decided to take an entrepreneurial route because I come from a disadvantaged family, just like most young people in my town. I also had to accept that I did not do well at school so I had to come up with a plan,” she explained.

Initially, she sold food informally and dreamt of owning her own restaurant, but sadly this enterprise was not lucrative.

After realising there was a gap in the agricultural industry in the province, because not many black people farmed commercially, she decided to switch her focus from selling food to producing it.

Kwetana’s business was registered in 2014 and she acquired 85 hectares of land in Qumbu through a lease agreement.

“I was only 20 when I started and no one took me seriously, especially because I am a woman. When I started off, I used only two hectares of the land,” she said.

Over the years, her business has grown and 15 hectares are now being cultivated and worked by five permanent employees and 15 temporary workers.

She said the challenges she faced as a young female farmer persist but she remains resolute in her dreams.

Her determination is paying off, with Kwetana supplying fresh produceto local supermarkets across the province, including Spar, Pick n Pay, Food Lover’s Market and Ideal Veg. She sells her produce to a local lodge and some local restaurants too.

Because of her hard work, she walked away with the provincial Top Entrepreneur: Commercial title at the recently held Department of Agriculture, Forestry and Fisheries Female Entrepreneur Awards 2019.

The vibrant woman would love to see more women farmers and thus offers training and technical support to other young producers in the province.

Play for women by women proves female leadership is power

Noted South African poet Lebo Mashile has taken to the stage to discuss her weighty history in the production Venus vs. Modernity.
SebenzaLIVE
2 years ago
Next Article