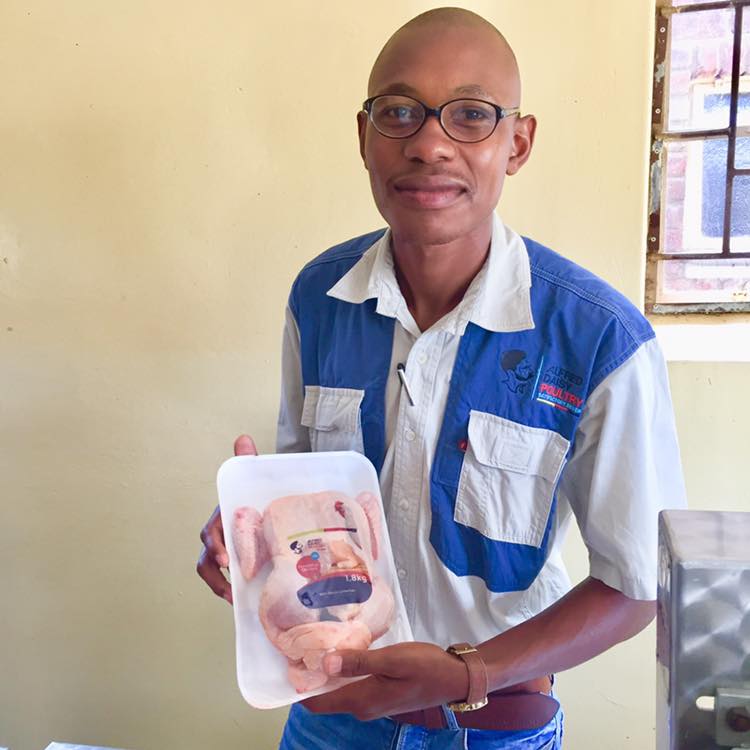 Mafikeng chicken farmer Siyabonga Mhlabane (26) has gone beyond the average chicken farming enterprise by raising, slaughtering, processing and packaging his own chicken products.

Siyabonga Mhlabane has gone beyond the average chicken farming enterprise by raising, slaughtering, processing and packaging his own chicken products.

“I fell in love with poultry and chose poultry science as a module. That’s when I began to understand the potential that the industry has and the production shortages that South Africa faces,” he explained.

South Africans consume more chicken than the country produces, which ensures that Mhlabane has a market for his chicken.

Mhlabane chose to enter into the full value chain so that he could maximise his business potential.

Mhlabane wants to fill the void and ensure that consumers get the best chicken meat in the market.

He raises his own chickens, before sending them to a local abattoir to be slaughtered, processed and packaged under his brand, Alfred Daisy Poultry.

The farm, which processes 3 000 grain-fed chickens a month, sells to fast food outlets, supermarkets, restaurants and members of the community.

Mhlabane wants to grow his business so that he can open his own abattoir and supply bigger markets.

“Studying modules such as agri-business propelled me to start my own business in 2018,” said Mhlabane.

When he first started the business, he used to slaughter manually for his clients.

He also said that he started his business with 100 chicks, after receiving a R7 000 loan from his mother who was also a chicken farmer.

He then received additional funding of R50 000 from the National Youth Development Agency.

Here's how to become the best hairdresser in town

Hairdressers cut and style hair according to customer requests. The tasks differ according to the requirements of their clients.
SebenzaLIVE
3 years ago

Nuclear science and technology is an industry with many opportunities that have the potential to address South Africa’s economic and energy problems.
SebenzaLIVE
3 years ago
Next Article