Get to know dub poet d’bi.young anitafrika ahead of the SA Book Fair 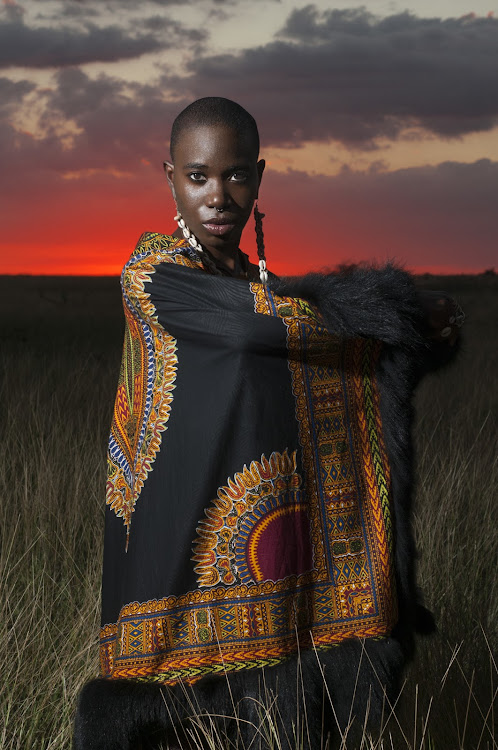 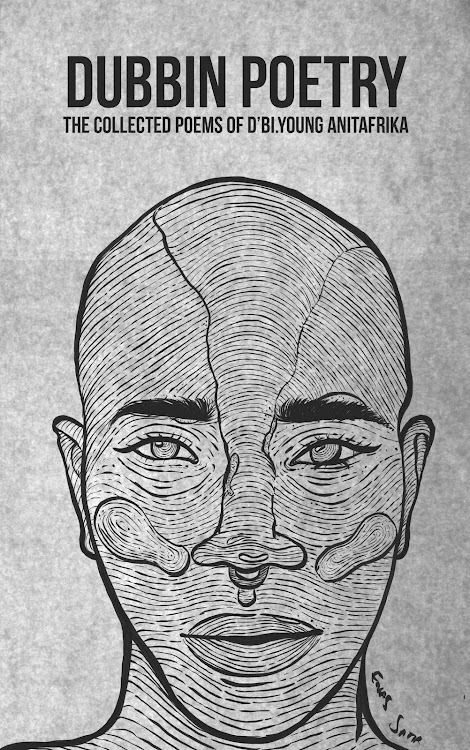 This Canadian Poet of Honour and award-winning playwright-performer’s work addresses sexuality, race, class, gender and the human experience. d’bi’s latest work, dubbin poetry: the collected poems of d’bi.young anitafrika, was published in May by spolrusie, a micro-press specialising in bqtipoc and feminist works.

Get a taste of this fierce, ingenious womxn in hxr conversation with our editor Mila de Villiers:

1. Oxford Reference defines dub poetry as “a kind of poetry that emerged in Jamaica and England during the early 1970s, influenced by the rhythms of reggae music ... Dub poetry includes lyrics and narrative poems on various subjects, including protest against racism and police brutality, the celebration of sex, music and ganja, and Rastafarian religious theme.” What does dub poetry mean to you?

Dub is word. Dub is sound. Dub is powah. Dub poetry is performance poetry, politrix, roots reggae. Dub emerged from the spiritual-emotional-physical-creative psyche and life experience of conscious youth in Jamaica in the 1970s, centred around the Jamaica School of Drama at the Cultural Training Centre (now the Edna Manley College for the Visual and Performing Arts).

Coming from the roots of reggae, dub fiercely challenged colonialism, imperialism, patriarchy, classism, racism, sexism, homophobia and other forms of oppression, while riding a wicked reggae beat. Through this old/new form of poetry/music (an outgrowth of the African griot tradition), Jamaicans and people worldwide continue to orate revolutionary art and struggle.

2. Dismantling/destabilising gender and sexuality norms as imposed by Western ideals feature prominently in your poetry. Could you elaborate on (a) the harmful - and destructive - nature of archaic gender roles?

Archaic gender and sexuality roles do not give me room to realise and express my full and dynamic humanity. Not only are they silencing and shaming, they also reinforce and justify inequality, discrimination and violence based on old colonial narratives that form the foundation of systemic racism, patriarchy, homophobia and classism. They are dangerous because they homogenise humanity when in fact we are brilliantly heterogeneous and need political, social and cultural systems that are courageous enough to educate us towards a deeper understanding of ourselves and our world.

and (b) your decision to include an "x" in gendered nouns and pronouns, eg. sxster (sister), axntie (auntie), midwxfe (midwife), and sxr (sir)?

Yes, gendered nouns and pronouns include an "x" in their spelling. This is to challenge the gender binarity of the English language, to be inclusive of all genders and to bring our awareness to how we relate to representations of gender in the book. I want the reader to be aware of how gender is functioning in their own mind and body by creating the environment for them to "bump up" against the words, each time their brain registers an "x" where ordinarily another letter would be. I kept Jamaica Nation Language words such as dawtah, moddah and faadah as is because I believe these spellings are already performing an anti-colonial queering, which includes (for me) the queering of gender and sex. 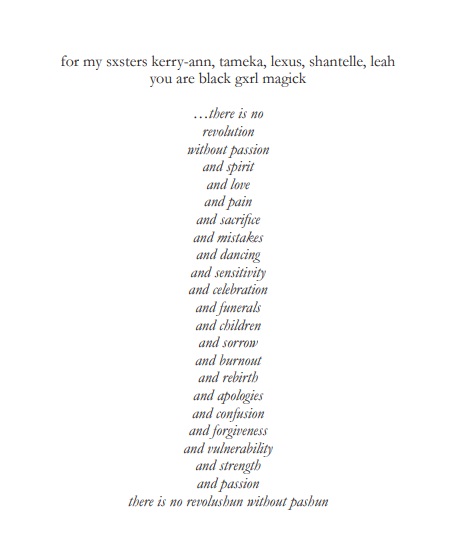 The foreword of 'art on black: book 1' of 'dubbin poetry'.
Image: spolrusie publishing

3. black love matters, the fourth book in dubbin poetry, contains new poems and excerpts of plays. You write that you were influenced by your mxther, Anita Stewart - a pioneer in the dub poetry field - and the "groundbreaking work shx contributed to the dub poetry movements". Did you ever expect to move into dubbin theatre? And, secondly, what role did your family (especially the womxn in your family) play in shaping your art?

My mother dedicated her drama school thesis of 1985, titled Dubbin Theatre: Moving Dub Poetry Into a Theatrical Realm, to Trudy-Ann (my birth name), "who needs to understand". Her incantation has been with me for a lifetime as I negotiate what it means to interpret her dub theory, expand on it and cultivate my own praxis based on her foundational work. I have always emulated my mother. She provided a mirror as a dub poet, activist, playwright, teacher and arts educator of the multiplicity of black womxnhood for me to be reflected in.

My movement into dubbin theatre has been a steady and organic one. Storytelling was taught to me by my mother. My mother's mother was a storyteller and so was her mother before her. They may not have been paid to tell their stories in the ways that I am, however they weaved the divine struggles of everyday life in Jamaica into quilted celebrations of worship, song, sorrow and jubilee. I learnt very early from them that life - beyond poverty, violence, (self) hate, abuse, inequity and degradation - is about gratitude, humility, love, healing, truth-telling and rebirth. It is these stories that shaped and continue to shape my art.

4. You include your first dub poem, once dere was a mxn (1988), in dubbin poetry. How would you compare the essence/subject matter of this poem (and your earlier work) to your most recent work, as published in the fourth book of dubbin poetry, black love matters?

I absolutely love that first poem about the man who the universe teaches a lesson when he attempts to use another human being, a womxn, for his selfish capitalist gain. When I reread it, it reminds me of a proverb or a pithy saying or parable. It's allegorical. I don't so much write in that style now. I see my earlier work as an emulation of my mother's work and the work of my mentors. With those beginning pieces, I really tried to honour foundational dub poetry's aesthetic in form, style and content.

As my work has grown throughout the years, I have given myself permission to move beyond my early understandings of dub and to add my own experimentations with form, style and content. These experimentations have been heavily influenced by black feminist thought and my love of singing. 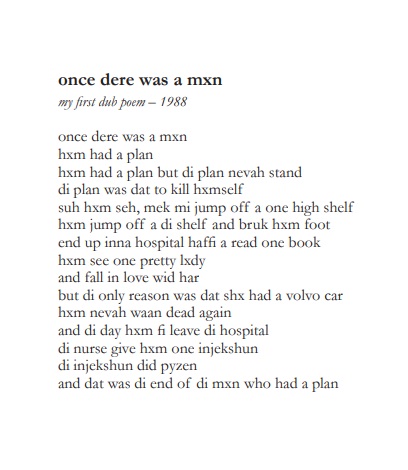 5. Can you please explain the concept of the Anitafrika Method - in the form of a dub poem? :)

I and I say self-knowledge before college
where politics play politricks
pon di heads of the people
trying to find our way
through the lost oralities
tongues twisted into fallacies
of colonial languages
we still speaking the rhythm of the heartbeat
of the drum
beating urgently saying home is everywhere on this planet
before we were taken, we trodded the land
leading to world populations who then invent
borders as barbed wire fences of a caged mind
telling us to stay out
shout! what di bloodclaat a gwaan inna dis raasclaat place
madness!
healing comes in knowing the sacred
who and what are we
integrity of purpose
humility to be humxn
experience of breath
experience of death
in dis ting dem call life
Live!

6. Dub poetry was born in Kingston, Jamaica, yet many prolific dub poets are based in London (Linton Kwesi Johnson, Benjamin Zephaniah, Jean "Binta" Breeze) and Toronto (Lillian Allen, Afua Cooper, Ahdri Zhina Mandiela). Could you comment on the trans-continental significance of dub poetry?

The transatlantic enslavement system is the largest forced migration experience in the history of the world and it has affected absolutely every facet of all of our existence. Global peoples are still "on the move" to survive, recover and prosper! Dub poets are among them.

'bible and gun', from 'rivers and other blackness between us: (dub) poems of love book 2' of 'dubbin poetry'.
Image: spolrusie publishing

7. Finally: how can we, the people, help forward the revolushun?

We can each forward the revolushun by embodying our complete selves and creating space for the people around us to embody their complete selves. As a part of that work, I ask myself the following questions regularly: What does it mean to self-recover? How do we decolonise our bodies? Where do we turn for spiritual guidance? When is it right to fight for what you believe in? From whom do we learn how to love? How do we hold ourselves accountable for the harm we cause? Is it our responsibility to create new systems of emancipation as we tear down old oppressive ones? What does it mean to live with integrity?

Forwarding the revolushun is the ongoing engagement with and the embodying of these questions, then negotiating through the answers to find solutions. Live your life with deep integrous purpose.