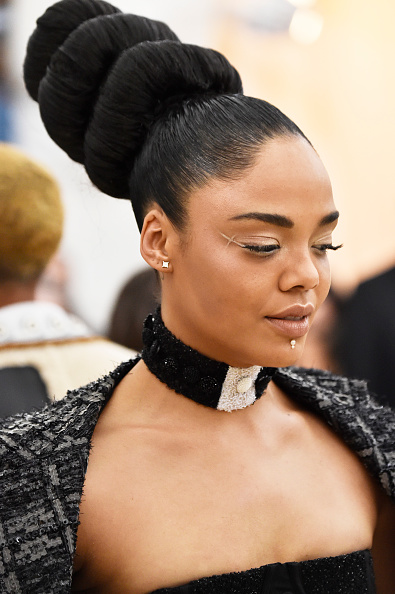 MAY 07: Tessa Thompson attends the Heavenly Bodies: Fashion & The Catholic Imagination Costume Institute Gala at The Metropolitan Museum of Art on May 7, 2018 in New York City.
Image: Frazer Harrison/FilmMagic

Marvel Cinematic Universe is slowly moving with the times and catching up with the importance of representation. Last year, Marvel released the groundbreaking Black Panther which is the first black superhero film.

And now, they’ve hinted that we might be in for a same sex relationship in the upcoming Thor 4: Love and Thunder.

Demi-goddess Valkyrie (played by the incredible Tessa Thompson), although bisexual in the comics had a scene from Thor:Ragnarok cut that made Valkyrie's sexuality known to fans. At the time, Thompson confirmed this in a tweet:

YES! Val is Bi in the comics & I was faithful to that in her depiction. But her sexuality isn’t explicitly addressed in Thor: Ragnarok. https://t.co/hmb5lYN5to

Marvel has now finally confirmed that Valkyrie is indeed bisexual and is the first openly queer Marvel character.

In an interview with Entertainment Weekly, Joe Russo confirmed that this is indeed the first openly queer Marvel character.

"There've been insinuations about other characters' sexuality, but this is the first openly gay character,” he said.

At the Comic-Con this past weekend, Thompson spoke excitedly about her character:

“I think first of all as king, as new king, she needs to find her queen. That’ll be her first order of business. She has some ideas. Keep you posted.”

Fans couldn’t be happier about this, and some have started hinting the identity of Valkyrie’s queen.

I jokingly made a post about how valkyrie and jane would be a good couple months ago and now they're going to be in a movie together?? taika please give the gays everything we want

“valkyrie has to find her queen”
- @TessaThompson_x
gays how are we feeling?