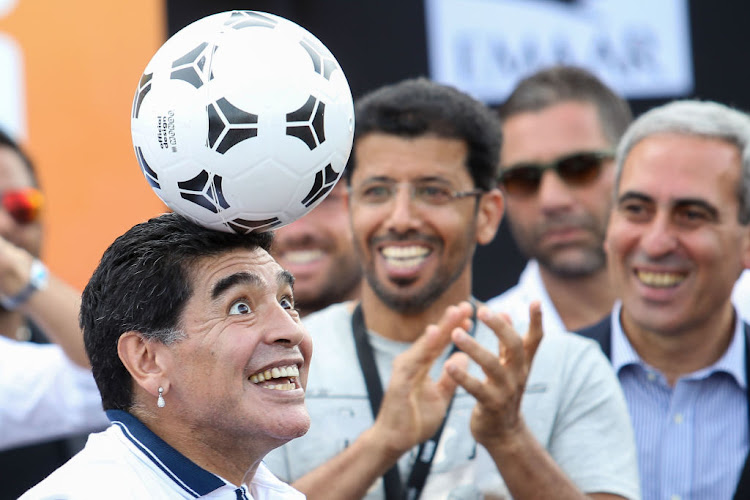 Soccer icon Diego Maradonna shows off his skills. The athlete is the focus of the documentary, Maradonna, by filmmaker Asif Kapadia who looks into his career as one of the most celebrated soccer stars.
Image: Getty Images

The Fifa World Cup has been awash with did-you-see-that moments. Where normally we trudge through the opening rounds of the tournament, this year has been flat-out action. Who would have predicted that Russia would thrash Saudi Arabia, or that defending champions Germany would lose to Mexico? That the Swiss would hold off the most star-studded team, Brazil, even though they have the world’s most expensive club player, Neymar?

Then there was Ronaldo’s hat-trick against Spain, and the free kick that thundered into the back of the net, that fast-tracked him into World Cup 2018 history. We’ve also already had a red card, the second fastest in history, against Colombia’s famous cannibal Carlos Sanchez, which occurred just three minutes into their opening game against Japan. Then there was South Korea who swapped jersey numbers to confuse Westerners who think all Asians look the same. And all the while, normally irascible Russians have been commanded by their tourism industry heads to participate in nationwide smiling lessons.

The film is an interesting exploration of the life of Diego Maradona, whose vibrant antics on the field meant that he was reviled in England (he scored a handball goal against them in the 1986 World Cup, which came to be known as the Hand of God). He was adored in Argentina, where, after being part of the World Cup-winning team, he managed the Argentinean team to the last eight in World Cup South Africa 2010.

Kusturica had unlimited access to the man and traces his story from humble beginnings to celebrity status – followed by his fall from grace through drug abuse and weight problems before he became rehabilitated.

Testosterone and football combine to paint a violent portrait of middle-class England in director Nick Love’s adrenaline-charged adaptation of a John King novel. Tommy is a typical 20-something soccer fan, bored with life, in love with lager and always looking for a little action from the ladies. Of course there’s the fighting, too.

When Tommy exchanges blows with a rival football fan and the situation quickly spins out of control, the thuggish sports fanatic is prompted to reconsider his brutal lifestyle and make a change for the better.

In a rough-and-tumble British prison where murderers, thieves and assorted madmen are locked away, inmate Danny Meehan (Vinnie Jones) is about to lead them all in the ultimate battle of their degenerate lives – but no one could have guessed it would be a soccer match.

Now, in an all-out playoff against the despised guards, the prisoners' goal isn't just to make goals; it's to prove the indomitable nature of the spirit, no matter how much it gets kicked, bloodied or knocked around.

Jess Bhamra (Parminder Nagra), the daughter of a strict Indian couple (Anupam Kher, Shaheen Khan) in London, is not permitted to play organised soccer even though she is 18. When Jess is playing for fun one day, her impressive skills are seen by Jules Paxton (Keira Knightley), who convinces Jess to play for her semi-pro team.

Jess uses elaborate excuses to hide her matches from her family while also dealing with her romantic feelings for her coach, Joe.

The Game of our Lives

In 1950 an unlikely group was assembled to represent its country in the first soccer World Cup after World War 2. The US were outsiders and underdogs: a 500-1 long shot.

Facing almost no time to prepare, opponents with superior training and scepticism from the rest of the world, this ragtag group of unknowns beat England in one of the most thrilling upsets in the history of sport.

With a rather bizarre combination of actors in its cast, including Sylvester Stallone and Pelé, the movie tells the story of the head of a German POW camp, soccer enthusiast Karl von Steiner (Max von Sydow), who organises a match between Nazi players and their Allied captives. Orchestrated as a way to push the Third Reich agenda, the high-profile game is set to feature an international team led by John Colby (Michael Caine), a veteran British player.

While the team, which also includes Luis Fernandez (Pelé) of Trinidad, trains for the match, Robert Hatch (Sylvester Stallone) plans a dangerous mass escape from the camp.

Set in 1960s and 1970s England, The Damned United tells the confrontational and darkly humorous story of Brian Clough’s doomed 44-day tenure as manager of the reigning champions of English football, Leeds United. Previously managed by Clough’s bitter rival Don Revie, Leeds had just completed their most successful period as a football club.

Taking the Leeds job without Taylor by his side and with a changing room full of what in his mind were still “Don’s boys” would lead to an unheralded examination of Clough’s belligerence and brilliance over 44 days.

The great British obsession with soccer receives a thorough skewering in this mock documentary look at perhaps the most hapless coach in the history of professional sport. The manager of England’s national football unexpectedly succumbs to a heart attack, and suddenly the search is on for a replacement.

Most people who seem qualified for the position have the good sense to turn it down, and so the responsibility falls to Mike Bassett (Ricky Tomlinson), a scruffy and loudmouthed lout whose claim to football fame is leading a previously undistinguished team to a league championship.

Acclaimed visual artists Douglas Gordon and Phillipe Parreno turn their attentions to filmmaking – and one of Europe’s leading soccer stars – in this offbeat documentary.

Zinedine Zidane was among the most celebrated athletes in European football; playing for Real Madrid, the Frenchman had earned a reputation for graceful yet aggressive play and a confrontational style.

Trailer for the wonderful 2006 documentary on Zinedine Zidane. The documentary is directed by Douglas Gordon and Philippe Parreno.

This 300-minute marathon could well be dubbed the Lord of the Rings of professional football. Across three films, it charts the story of Santiago Munez, a Mexican immigrant living in Los Angeles who works as a gardener but dreams of making the most of his talents on the pitch.