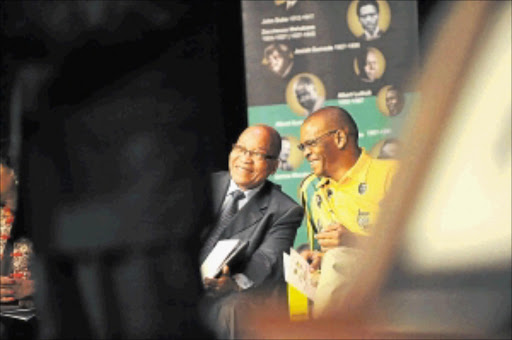 Former Jacob Zuma and ANC secretary-genera Ace Magashule share a joke at at the ANC centenary celebration held in Sasolburg in 2012. The writer says the two are prepared to turn this country into a laughing stock.
Image: Tsheko Kabasia\File

Clearly ANC secretary-general Ace Magashule and former president Jacob Zuma are prepared to turn this country into a laughing stock. The ANC has destroyed itself and this country. I don't know if Magashule and Zuma realise this or they are just plain arrogant.

Their gullible supporters have promised chaos should Magashule step aside. I will never understand people supporting those who stole from them. I don't know what kind of lies are being fed to those poor souls, but knowing Zuma's smooth talk, they stood no chance.

The ANC is so used to blind support to the extent it thinks it owns the electorate. The members don't even believe that they should stand before a judge and plead their corruption cases; they lie to the same supporters about non-existing conspiracies against them.

The NEC adopted the 'step-aside rule' last weekend, which stipulates all members facing charges of corruption or other serious crimes must step ...
News
1 year ago

The ANC has been "turbocharged" after its heated national executive committee (NEC) meeting, Ramaphosa says.
News
1 year ago

'I am not going anywhere. I listened to Julius Malema. I am a member of the ANC. I will remain in the ANC until I die.'
News
1 year ago
Next Article