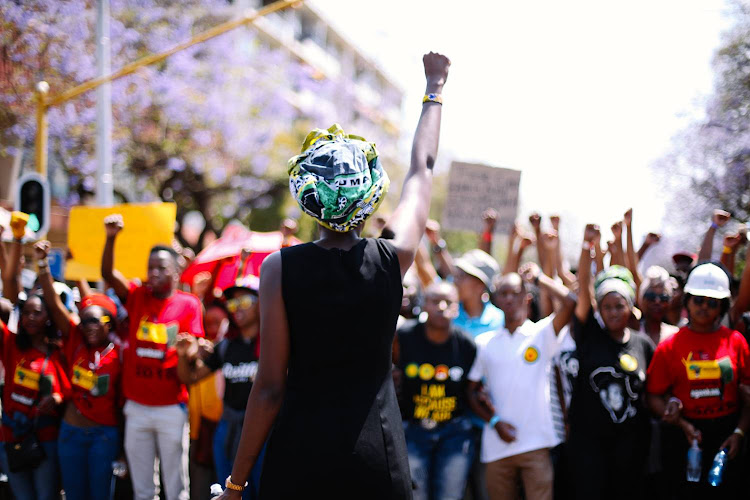 “Our focus right now should be on the question of race; we will deal with the gender question later”.

It was in 2016 when this statement was made by a young man, one of the most notable faces of the #FeesMustFall movement that changed the face of higher education in South Africa.

We were in a meeting at the Parktonian Hotel in Braamfontein with student leaders across the country, trying to synchronise our activities in order to strengthen the impact of the movement. When a young woman suggested that the successes of the movement depended on its ability to employ an intersectional approach to the struggle, this was the response.

This incident is not isolated, it is reflective of a broader attitude within the student movement and indeed, the broader society, towards the question of gender. In the new South Africa, a country that is in many ways not so new, the race question has been given great priority through policy interventions and general discourse.

Undoubtedly, the nature of our resistance and liberation history necessitates the prioritisation of race, for it was on the basis of race that apartheid was facilitated. But our oppression was layered. It was marred in complexities that were deeper than the de-civilisation and dehumanisation that emanated from racial segregation.

Throughout history, Black women have been hurled to the margins of existence, thrust at the very edge of the periphery where our oppression was not only racial and classist, but also sexist.

While both Black men and women suffered the gross violations of their human rights that characterised apartheid, Black women suffered far more and for many years, were completely marginalised even from the very organisations that would later become architects of a democratic South Africa.

Black women who suffered the terrorism of the colonial state and endured imperial devastation were not accepted as members of the African National Congress when it was formed in 1912. It would take more than three decades for this to change.

This historical invisibilisation of Black women has set parameters for the subordination of the gender struggle even in post-1994 South Africa. The deeply problematic views that found expression on that afternoon at the Parktonian Hotel reflected not only this history but a South Africa that is still resistant to change.

It reflected a South Africa in which Black women continue to be regarded as ornaments, completely incapable even of articulating their own struggle without the aid of the all-knowing man who insists that gender is too insignificant a struggle to be given a priority.

To be a young, black feminist in the new SA is to constantly negotiate your existence not only in this racist society, but in the black community

To be a young, Black feminist in the new South Africa is to constantly negotiate your existence not only in this racist society, but in the Black community that knows too well the brutality of oppression.

It has often confounded me how Black men who know too well the brutality of oppression tend to be so comfortable existing in a society in which oppression occurs. It is not too uncommon to hear Black men argue that feminism is nothing more than an attempt at obliterating the Black family, or at worst, an assimilation into “White feminism” which we reject with the contempt it deserves.

The reality of the situation is that White feminism, like the regressive Black nationalism that insists on the subordination of the gender question, has vested interests in the silence of Black women. Because we exist in a world in which Whiteness is legitimised, White feminists have created for themselves a niche in the patriarchal world of knowledge production.

The construct of the Black woman as passive, voiceless and inarticulate is the foundation on which White feminism rests. To recognise Black women as people with agency would lead to White feminists’ loss of dominance in the domain of ideation where their hold is already threatened by a shift towards decolonial discourse.

But despite these attacks on Black feminists, we continue to insist on being visible. Over the years, Black women have mobilised and organised against the heteronormative patriarchal violence that defines our existence.

The regressive patriarchal elements in the #FeesMustFall movement who sought to dismiss the gender struggle as a thing of insignificance became pariahs, for we demanded and fashioned a movement anchored on intersectionality – a space in which women and the LGBTIQA+ community could lead.

And while we daily battle with attacks on Black women - ranging from the corrective rape endured by lesbian women in our townships to domestic violence in our homes, where Black women experience the latter crime at a rate of 35% higher than do White women – we remain firm in our conviction that the future is intersectional.

Ours is a struggle to fashion a higher civilisation, one in which the gender struggle is not something we address after we have resolved the race question, but something that is deeply linked to the total liberation of this South Africa that, even as it hurts us, is home.

*Wa Azania is a Masters candidate in the Department of Geography at Rhodes University and the the bestselling author of Memoirs of a Born Free: Reflections on the Rainbow Nation