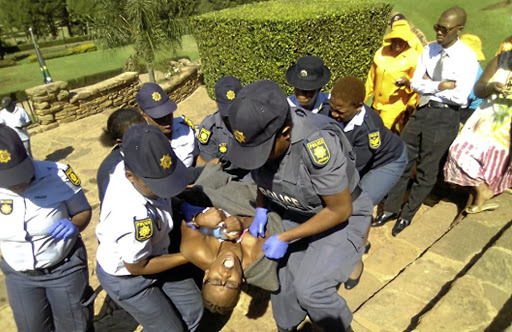 Gugu Ncube is arrested during her naked solo protest at the Union Buildings. The writer is critical of the heavy-handed approach by the police during the arrest.

We should never forget Gugu Ncube's plight and her pain. She recently staged a naked one-woman protest outside the seat of power, the Union Buildings.

Ncube alleges that she was sexually harassed by her former boss at Unisa.

I find her action courageous and brave, as it couldn't have been easy.

I was dismayed by how she was treated by the police. Why would you treat a non-threatening woman in such a violent and brutal manner, reminiscent of the apartheid era?

We need to take a hard look at our policemen and women, who I think need retraining on the values that are embedded in our constitution.

Ncube had a right to be heard and attended to in a manner befitting a country which prides itself on being democratic.

She was lambasted, vilified and condemned for what, in some people's eyes, was an indecent act.

Her narrative has been doubted because she is said to have taken too long to speak out, that she went along with the relationship for as long as she did and enjoyed the benefits - and suddenly wants the public's sympathy.

It has been said that Ncube is manipulative, untruthful and is an attention seeker with a history of making wild accusations against men when she doesn't get what she wants.

I am still to hear any of us asking the alleged perpetrator why he violated her. Failure to do so makes us complicit in Ncube's ordeal.

The Commission for Gender Equality (CGE) will investigate alleged sexual harassment at Unisa after Gugu Ncube was arrested outside the Union ...
News
2 years ago

The vilification and victim blaming that she is going through reminds me of Fezekile Ntsukela Kuzwayo, who was labelled a slut, immoral and a political tool in the hands of men with a political agenda to stop Jacob Zuma from becoming president.

In all of this, the former president's sexual escapades were never a matter of public scrutiny, because having many sexual partners is considered a badge of honour for men.

I wonder why Gugu Ncube is being charged with public indecency, when many of us have seen a scantily clad Zodwa Wabantu in the public space and she has never been charged with indecency. Instead, we find her entertaining and laud her for her business acumen.

These are two women who are using their bodies for a means to an end, but the one who uses it for protest, is charged with public indecency.

This is society saying it is OK to be naked for the enjoyment of others, especially men, but not for a protest that seeks to vindicate you and give you justice.

Do not take my example of Zodwa Wabantu as me having a problem with how a woman uses her body. I am merely using Zodwa's example to display society's hypocrisy, inconsistency and double standards.

Sexual harassment has nothing to do with sex, but it is about power imbalances in our society and the perpetrator using that imbalance to assert their power in the relationship.

It is us men who need to call each other out, rather than lambasting Ncube for her stoic and unmovable resistance to toxic masculinity.

Sexual harassment has long-lasting psychological effects on the survivor.

I hope that Unisa will support Ncube in the quest to find closure and move on in her life, by ensuring that they walk this journey with her.

To professor Mandla Makhanya, Unisa's principal and vice-chancellor, supporting Ncube would not mean that you are agreeing or disagreeing with her allegations.

All you will be doing is carrying out the duty and mandate of giving victims of sexual violence the necessary support for them to get justice and holistic healing, especially when the alleged perpetrator is associated with your institution.

Finally, we all owe Gugu Ncube our support and encouragement in her quest for justice.