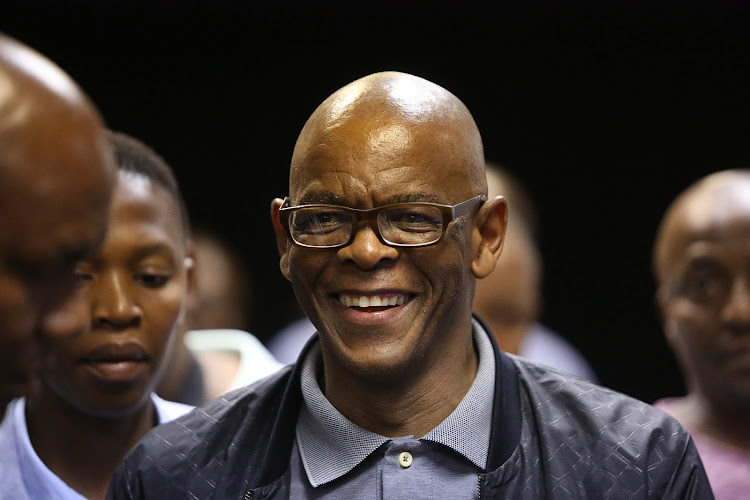 ANC secretary general Ace Magashule at the media briefing on the decisions of the NEC and new political developments relating to the ANC leadership in KwaZulu-Natal. Picture:
Image: THULI DLAMINI

ANC NEC members‚ including members of the party’s top six‚ descended on the province on Tuesday to formally communicate the decision which is in line with the party’s renewal strategy ahead of next year’s national elections.

The top officials met with the PEC before addressing media on the outcome‚ without the presence of the suspended PEC.

It has been approximately a month since a not entirely new breed of leadership took power in the ANC.
Opinion
4 years ago

Newly-elected ANC secretary-general Ace Magashule told the media after an NEC meeting at Durban’s Coastlands Hotel that in line with the party’s constitution they had decided to suspend both the KZN and Free State PECs.

“All of us agreed that we need to find a political solution because once the PEC appeals‚ which both provinces have done‚ the appeal suspends the court decision or judgment which might take time to reach finality‚” said Magashule.

Both the KZN and Free State PECs‚ which supported Nkosazana Dlamini-Zuma for ANC president during the party’s 54th national elective conference in Johannesburg last month‚ have appealed against court decisions which nullified their provincial leadership structures.

But Magashule said on Tuesday that the ANC national conference had agreed that the party would try by all means to resolve their problems and challenges internally. He said the decision to suspend was taken in the interests of protocol.

The ANC's NEC elected its National Working Committee (NWC) late on Friday‚ which included a mix of leaders.
News
4 years ago

“Suspend in this case is different from dissolution because if you dissolve them the constitution says you must then go to conference after nine months. Suspension gives a period of three months‚ not more than three months. And that’s why we have agreed that the provincial conference must be held between March and April‚” he said.

Magashule said that a committee of the NEC members had been established to work and supervise the interim structure which will be convened by former KZN economic development and tourism Mike Mabuyakhulu and coordinated by his predecessor and former ANC provincial chairman‚ Sihle Zikalala.

After the media briefing‚ members including Zuma and Zikalala were upbeat and jovial ahead of a second meeting scheduled with the top six. They will be supported by NEC members convened by Edna Molewa‚ who will be supported by Lindiwe Sisulu‚ Candith Mashego‚ Dakota Lekgoete and Sibongile Besani.

Magashule said all members of the PEC had welcomed the NEC’s decision and had committed themselves to working together.

Contest to replace Mabuza as ANC Mpumalanga chair hots up

“We all agree that we are not addressing groupings or factions. We have identified individual members of the ANC who are in good standing. We are not reconstituting the PEC. The PEC is happy with the outcome because they understand that the NEC has a right to dissolve or suspend any structure‚ any province‚ any region.”

Magashule said they had also congratulated the two warring factions in the province “for having started their own initiatives of trying to find one another because they have been engaging themselves”.

He said the interim structure will assume all decisions of the PEC which still applied‚ including the provincial cabinet reshuffle which saw some of those MECs who were seen as opposed to the new leadership elected after the annulled 2015 conference axed.

“But the main focus of the interim structure is to ensure that it takes the ANC structures to the conference in KZN‚” said Magashule.

The NEC’s decision to elect an interim structure is seen as a victory for the so-called ANC rebels in the province which took Zikalala’s PEC to court over the legitimacy of the 2015 provincial conference which saw Zikalala defeating ousted premier Senzo Mchunu as the party’s provincial chairman.