To be or not to be on those lists, that's what has Ruler of Nkandla pondering 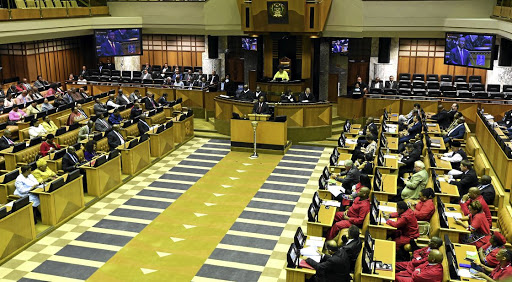 The Game of Bags reporter tells viewers there has been an outcry over some of those headed for our National Assembly accused of taking bribes and lying under oath, says the writer.
Image: Siyabulela Duda

Following a tip-off, the crew of Game of Bags sneaked into a private party held at a sumptuous game reserve to the north of the country. By the time we got there, with our night-vision cameras, the party was in full swing.

Camera zooms in on comrade Mvula'inyana, a bulging Louis Vuitton bag swinging from the curve of her elbow, sweating it away on the dance floor, moving to the song of the day: I made the List!

Soon enough, she is joined by Thab-Thab Dlabusuku. Unlike Mvula'inyana who knows how to really get down on the dance floor, Thab-Thab is limping along, croaking, "I made the list, I made the list!"

Soon enough, the venue erupts into new raptures of excitement. Everyone looks at the entrance to the lounge.

Camera zooms in on the newcomer, who is flanked by bodyguards. It is none other than the ruler of the Nkandla firepool, the conqueror of all courts, the elusive Teflon man, Gedleyihlekisa himself.

The reporter from Game of Bags thrusts a mic into his face, "Mr Gedle, we see you're not on the list. Any comment?"

"What list?" he pauses, "Oh, Thuma Mina's foolish list? I don't want to be on that list. What is he going to pay me? I charge an appearance fee, ask the people at Saxonwold. But, hey, I am here to celebrate with my sistas Thab-Thab and Mvula. Now that they are on the list, I know they will find yet another businessman willing to buy them stuffed bags and spoil them with braai packs and whiskey. Now, that's the list I want to be on. Thabzo, come over here, girl."

Wheezing after her exertions on the dance floor, Thab-Thab limps across: "Yebo, baba, we're on the list. Being on the list is important, baba, because it brings you closer to power. Corporate South Africa loves a person who is close to power. Or at least gives an impression of being close to power. We won't forget you, baba."

Gedle: "Eh, ntombazana, do you really trust Thuma Mina? As a seasoned polotishan I know that it's always said you should bring your friends close to you but your enemies even closer. Maybe Thuma Mina wants to bring you closer so he can easily plunge the knife."

"Yhoo, baba," says Mvula'iyana dropping her bag on the floor and assuming a kung fu fighting stance, "I'm a township girl. I know how to take care of myself."

Thab-Thab: "Thuma Mina has some smallanyana skeletons that I know of. If he starts with his nonsonso, I will show him the eye of the worm."

Camera zooms in on our Game of Bags reporter who is explaining to viewers: "For those who've just joined us: we're at a private party. Some Khongolose members are celebrating the release of the Crucial List. This, of course, is the list of candidates for the National Assembly and provincial legislatures.

"There has been an outcry against the inclusion of some names, especially that of Mvulai'inyana who reportedly received bribes from the Bhozabhoza company of the Wazzoni family. Also shocking is the name of Thab-Thab who was found to have lied under oath in the matter relating to mentally disturbed patients who died in the care of an organisation she was in charge of, Life Ebuhlungwini.

Camera zooms in on Mvula'iyana who is addressing the gathering: "Comrades, we made the list. Now, let's sit down and eat. Gigabyte, tell your wife to stop taking selfies. They will compromise us."

David Mabuza says members of the ANC who did not make it to the party’s parliamentary list will be accommodated in other key government institutions.
News
2 years ago

The EFF’s senior leadership stands at the top of the party’s list of candidates for parliament after the May 8 general elections.
News
2 years ago

Dlamini, Zwane, Nomvula get nod
News
2 years ago
Next Article