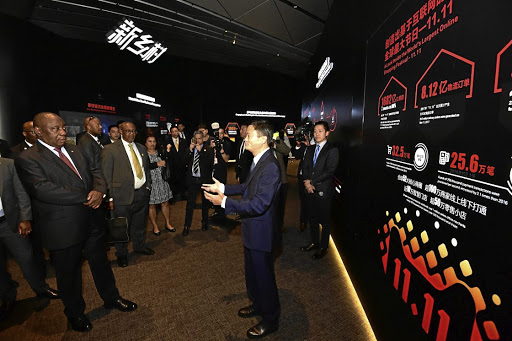 The song lamented the conditions of hardship under which black people lived throughout the then colonised continent and, presumably, in the Diaspora.

Its haunting lyrics include the following lines, translated below from isiXhosa:

"Oh, for the plight

of the black person

All other nations put us

What have we done?

Almost eight decades since Masiza composed the song, and some 50 years after most of our continent finally gained political independence from European powers, the central message of Vukani Mawethu remains painfully relevant.

That is why post-colonial apartheid artists such as Simphiwe Dana still compose songs like Thwel'ubunzima" (We are having it hard) and "Nzima", which asks: "Senzeni ebusweni benkosi?" (What sin have we committed in the eyes of the Lord?)

These songs, and many others from here all the way to the Caribbean islands, are a reflection of our current state as a people.

The expo‚ a trade fair solely for imports‚ aims to promote China as a major consumer of the world’s goods.
News
3 years ago

I was reminded of Masiza's composition during a visit to China recently. The East Asian superpower has been making its presence felt all over the world, especially on the African continent, much to the discontent of Western powers who - for over 400 years - made Africa their stamping ground.

The West's discomfort with China's rise in economic power and influence has sparked off a new Scramble for Africa. This new wave, however, does not come in the form of military invasions and political conquest.

It is mainly a propaganda war aimed at winning the hearts and minds of the continent's population.

On the one side of the propaganda war, we have wealthy China with its so-called chequebook diplomacy winning over African governments by offering them much needed loans for infrastructure developments on terms that look far more favourable than what the West used to offer.

China is said to be the main investor in many of Africa's nations and is responsible for major projects such as the construction of international airports, highways and factories in countries like Zambia, Ethiopia and Ghana.

Its supporters say these mega-projects, which do create much-needed jobs for the citizens of these countries, would never have been possible without the help of China.

On the other side are Western powers and Western-sponsored think-tanks warning us that China's activities on the continent can only lead to the "re-colonisation" of Africa, this time by Beijing.

The "unconditional aid" offered by China for most of the continent's poor nations is a "debt trap", they warn, that can only result in those nations being forced to sell family jewels to China at ridiculously low prices.

In Zambia, for instance, there has been a public outcry following claims by an opposition party that the government was planning to sell off Zesco (their version of our Eskom), the Lusaka airport as well as the national broadcaster to China because of the country's indebtedness to the Chinese.

However, these allegations have been flatly denied by the Zambian government.

Cyril Ramaphosa has urged a meeting of the FOCAC to find ways of resolving the trade imbalance between China and the continent.
Business
3 years ago

Similar anti-Chinese sentiments appear to be gaining ground in a number of other countries. Are they justified or is the continent being hoodwinked by its former colonisers into rejecting a partnership that can help Africa finally overcome the status of permanent underdevelopment imposed upon it by colonialism?

This question bothered me for much of this week, especially after listening to former president Thabo Mbeki tell the story of how France still has not forgiven Haiti for the successful 1804 Haitian revolution in which slaves of African descent defeated the then European superpower.

According to Mbeki, the South African government and others who were involved with preparing for the bicentennial celebrations of the revolution in 2004, were quite eager that France be part of the festivities as Haiti had been the first black country to break free from colonial power.

But a representative of the French government, said Mbeki in Johannesburg this week, told then foreign affairs minister Nkosazana Dlamini-Zuma that the French took a decision not to partake in the celebrations when Haiti turned 100 in 1904, and they were not prepared to change their stance in 2004.

If France in 2004 had not forgiven a small island of Haiti for giving it a bloody nose 200 years ago and in a just struggle for self-determination and freedom, it is hard to believe that all its warnings - as well as those of its partners - about China's "recolonisation" of Africa is motivated by genuine concern for the continent.

This is not to say that Africa should not get into a relationship with China with its eyes wide open. We should be suspicious of everyone, especially given our long history of being dominated and exploited.

However such suspicion should not stop our nations from engaging with anyone - whether from the East or West - who can help them escape the vicious circle of underdevelopment, high unemployment and poverty.

Just over 40 years ago, China was as poor as much of our continent. Yet today, following decades of economic reforms and the opening up of its economy, China is the second-biggest economy in the world. Its economic growth and development over the last four decades should serve as a reminder to Africa that our past as well as present circumstances ought not define our future as a continent.

In seeking to liberate our continent from economic and political conditions that lead to the composition of songs such as Masiza's Vukani Mawethu, we must seek cooperation with both the East and West on our own terms. We cannot afford to be dictated to by either.