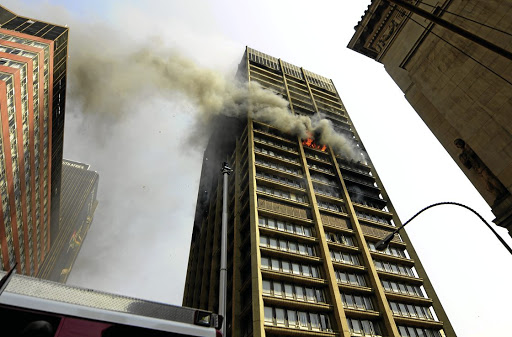 The writer says like the Esidimeni disaster there were warnings before a building housing three government department caught fire and claimed the lives of three firefighters.
Image: SANDILE NDLOVU

Although he holds the most powerful political position in the country's economic powerhouse, he has no airs and graces about him.

In the years that he has been premier, and in his previous life as the provincial secretary of the ANC, there were no scandals associated with him.

Braver commentators might even call him "Mr Clean". In some quarters he has a reputation as a fierce opponent of corruption, something - those who like him say - that was a source of an apparent breakdown of relations between him and one of the key ANC factions ahead of the recent provincial party conference.

Fire in one of the government buildings in Jhb CBD has since spread to lower levels through ducts filled with paper and boxes.
News
3 years ago

Those who still believe the ANC can still recover from the leadership crisis that the party has been going through over the last decade or so, suggest him as the most suitable candidate for a future secretary-general.

While the perception out there would be that the provincial governments of North West and Free State, for instance, are fraught with corruption and mismanagement, the Gauteng administration is generally associated with progressive thinking and competence.

Some of this had to do with the political environment we have just emerged from as a country.

Whereas provinces such as North West and Free State were under an ANC political leadership that enthusiastically participated in then president Jacob Zuma's project to weaken the state for the benefit of the Guptas and other associates of his, the Gauteng ANC very publicly opposed this.

But is this positive perception of the Gauteng administration borne out by reality?

This is the same province that gave us the heart-wrenching Life Esidimeni disaster.

It is in Gauteng where the country's public health crisis seems acute, with a number of hospitals and clinics said to be on the verge of collapse.

The fire at the provincial government building that claimed the lives of three firefighters in Johannesburg on Wednesday is but the latest in a number of incidents that put into question our assumptions about how well the country's richest province is run.

Although the causes of the fire are not yet clear, the manner in which the whole saga has been handled is troubling.

The most damning charge against Makhura's government on this issue is that public servants working in the Bank of Lisbon Building raised concerns about its safety for years without being listened to by their authorities.

Instead, the National Education, Health and Allied Workers Union claims some of the shop stewards who raised the issue were pushed out of their jobs.

If true, this would not only be shocking, but would be pointing to a pattern in how the Gauteng provincial government is run.

Lest we forget, there were many warnings to the provincial government about the possible dangers of moving mental patients to inexperienced non-government organisations before lives were lost in the Esidimeni saga.

Makhura and his administration need to do some serious introspection into why it seems to take a disaster before his government acts on issues they had been warned about.

Soon Makhura and his leadership in the ANC will be criss-crossing the province to convince voters to return them to office next year.

He is facing a strong challenger in DA candidate for premiership and Tshwane mayor, Solly Msimanga.

When the DA and its EFF partners gave the ANC a bloody nose in Gauteng during the 2016 local government elections, the party blamed this on Zuma and e-tolling.

But one gets the sense that, despite the positive mood arising from Cyril Ramaphosa becoming president, voters would judge Makhura's government based on its own performance.