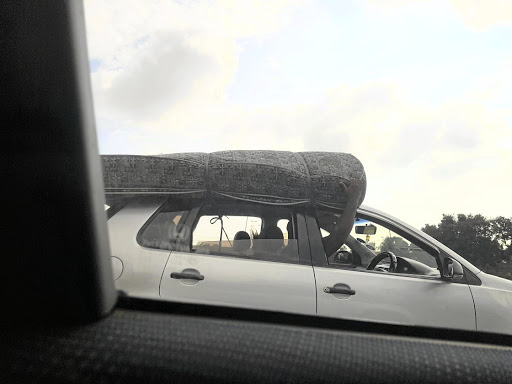 Fathers of girls in the township loathe the sneaky Vivo but they can claim the last laugh seeing a down on luck loverboy moving his stuff with the small car he earlier acted big in.
Image: Kwanele Ndlovu

This past Sunday, while driving quietly with my brother and company, my attention was stolen from the usual admiration of the cars I can't afford to the spectacular sight of subtle poverty that troubles the working class.

The Polo Vivo is notorious for plenty of mischief in the township - fathers with daughters will attest to this.

However, I sure did not expect one to be turned into a utility van in broad daylight.

There, on the R23, a young man and his badly groomed lady friend were carrying a cushy looking mattress scantily tied to the roof of the car. He, tightly gripping the load with his right hand and keeping focus on the road. She looked sad and distant, as if she was not part of the plan; as if she should be somewhere better.

As we followed the vehicle and eventually overtook it, I let out a shriek of laughter, which then turned into silent sorrow. I realised that as much as I had no idea where this pair was headed, I knew their tale. I knew about that low point in poverty when the only reason the bank has not repossessed your car is because you have disabled the tracker.

Now the car remains the only proof that you've been working for the past decade - and it is that earning which has kept your girl in the passenger seat as you move to a smaller room to start anew.

When you look around your flat, you realise that your camp chairs are broken and the table won't fit in your hatchback.

See, you want to take the bed, but ropes are expensive at the garage and hardware stores are closed on Sunday. It's April 1st and the new tenants are waiting outside to move into the flat.

‘Easter reminds me of time spent with family and hearty meals’

It’s no secret that presenter and businesswoman Lorna Maseko loves to cook.
Good Life
3 years ago

The mattress! That's what you grab. It's a pillow-top dream sleeper that took you 24 months to pay off. You take just the mattress, your clothes and an extension cord. You grab that mattress and hold onto it on the highway while your girl is probably texting another guy. You want to tell her that everything is gonna be alright but you're already changing gears and steering with only your left hand.

You can't even utter a single swear word when passers-by take photos of your strong arm holding that mattress. They don't know your struggles, the pain and endurance. Your right arm will be so tired after this journey, you will urinate sitting for the next two days.

That was the picture that flashed through my mind as I clicked away on my phone capturing that man's ordeal.

Only it was a bittersweet sight for us because my brother knows this kind of loading all too well.

He, too, once carried a mattress on the rooftop of a Corsa Lite, with a drunk friend holding the left side with both hands. Their situation was only made worse by the fact that they were moving at the very hour that the weather changed and a massive Johannesburg storm was approaching.

As we drove past the hapless couple, my brother remarked: "at least he has the leisure of driving slow".

"When I moved my mattress I was speeding, trying to outrun a dark storm that threatened to wet the only valuable possession I had to start a new life".

"My friend was hanging onto the mattress for dear life as I also battled to change gears at the robots while the damn thing kept slipping backwards!"

The Minister of Transport‚ Blade Nzimande‚ has approved the adjustment of toll tariffs on national roads for the 2018/19 tax year. The price hike ...
News
3 years ago
Next Article