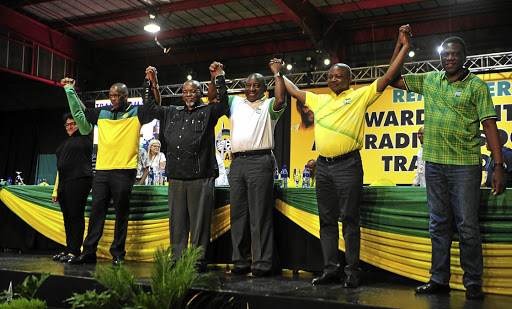 As we try to get back to normal life, many South Africans feel as though 2017 left a big political question hanging in the air.

There was a great expectation that the ANC conference would, once and for all, provide clarity and direction. Many people thought that victory by Nkosazana Dlamini Zuma would mean the end of the ANC as a governing party in 2019.

The other side of this belief was that Cyril Ramaphosa could save the ANC.

But, even with Ramaphosa at the top, most South Africans are still not sure if the ANC - or the country - will be saved.

This is because ANC delegates decided to elect a combination of thieves, semi-thieves and pseudo-saints.

The paradox is that no one has won, and no one has lost. It is a stalemate.

Ironically, Ramaphosa is the most worried man. He knows that the thieves sitting next to him at Luthuli House will watch his every move.

The top six is indeed a divided house, and so is the national executive committee (NEC).

When there is a deadlock, the matter will be escalated to the national working committee (NWC), and ultimately to a paralysed NEC.

The first test of strength is what to do with the national liability called Jacob Zuma.

Ramaphosa wants Zuma out, but the thieves at Luthuli House know that Zuma will not go to jail alone - remember Bathabile Dlamini's "smallernyana" skeletons?

The thieves in leadership will fight tooth and nail to keep Zuma in the Union Buildings, to show Ramaphosa that his wings cannot fly.

Justice Malala: It's time to get behind Ramaphosa

Sometimes we have to choose optimism over our own‚ very human‚ instinct towards pessimism.
Opinion
4 years ago

The real problem is that the ANC does not have a deadlock-breaking mechanism. There is a traditional-leadership-like culture of not voting at meetings of the NEC. This is the atavistic culture that has kept the rope called Zuma around our national neck for so many years.

The NEC debates and over-debates a contentious issue until the parleying blocks realise that they both stand to lose if they split. Then they emerge out of the quagmire with a sham message of unity.

Ramaphosa will not push too hard, for he will not want to make a haunting history - of being the president under whose care the ANC collapsed.

It is indeed worse for Ramaphosa; he was not elected by an overwhelming majority. He escaped defeat through the eye of the needle. He knows the thieves are many, and that their daggers are out. Poor Ramaphosa; he must sleep with one eye open. He will lead as if he is wearing heavy gumboots, dancing on eggshells.

Such will be the ANC over the next five years. The clarity and decisiveness never came. Even those who tell us that the leadership represents unity know very well that the thieves at the top are dangerous.

How are we to trust a combination of thieves, semi-thieves and pseudo-saints?

History seems to be ambivalent about Cyril Ramaphosa. It first made him a political rock star by placing him at the centre of the pre-1994 political settlement. Now it looks like history wants poor Ramaphosa to swallow a bitter-sweet pill: he could be the first ANC president to sit on opposition benches.

Given the uninspiring outcome of the ANC conference, it is not far-fetched to imagine the party not mustering 50% of the national vote next year. Many South Africans don't trust the thieves at the top.

Think of the ANC possibly losing Gauteng, and a sizeable tribal vote going back to the IFP in KwaZulu-Natal. Remember, too, that Gauteng and KZN represent about 40% of SA's population.

Were the ANC to get below 50% in Gauteng and KZN, and lose 2% in every other province, the party would be out of power in 2019 - if the results of the 2016 municipal elections are anything to go by. This is the dark cloud above Ramaphosa's head.

For now, we can declare 2018 the year of thieves, semi-thieves and pseudo-saints. I wish you a happy new year.